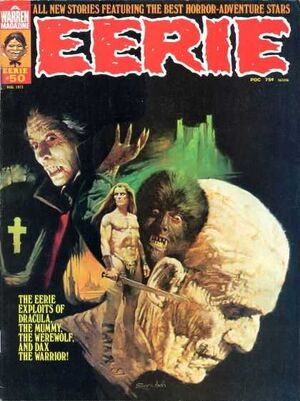 Appearing in "The Mind Within"Edit

Synopsis for "The Mind Within"Edit

This segment gives us some background info on our protagonist, Jerome Curry, about how he found the amulet he used to become the Mummy, and about his desire to kill the various women who have spurned him in the past. When thieves steal the amulet however, Curry might find himself trapped in the Mummy's body forever!

Appearing in "This Evil Must Die"Edit

Synopsis for "This Evil Must Die"Edit

An expert on the supernatural comes to town and tries to defeat Arthur Lemming/The Werewolf. Only when he starts using commonly used witch material to fight him, the town mob thinks he is using witchcraft and attacks him!

Appearing in "Genesis of Depravity"Edit

Synopsis for "Genesis of Depravity"Edit

A woman calls Satan in order to obtain eternal life and beauty. Satan arrives and grants her her wish, by making her the first ever vampire. Her first victim is none other than Count Dracula.

An archeology student comes across an ancient castle occupied by an old woman and her servant, who tells the student that she's not all there in the head and believes he's Agamemnon, a Greek lord. The student plays the part, but soon discovers the truth, that he's about to be killed by her.

A priest meets with an evil Baron who mistreats his people. By using a poisoned needle on a ring he wears, he knocks the Baron out, who is out cold so long that he wakes up far in the future and is run over by a train.

A man comes across a cult of people under mind control. When they realize he is having independent thoughts, they try to attack him mentally, only to fail. He manages to kill their leader and is about to leave when he realizes all the power he'd have over them, and becomes the new leader of the cult.

Appearing in "The Secret of Pursiahz"Edit

Synopsis for "The Secret of Pursiahz"Edit

Dax comes across an old man who has been caring for a man with wings. The winged man, Pursiahz, tells him of how his lover became trapped in a giant spider's web and he was too afraid to stay. Dax heads there and defeats the giant spider, but the woman is dead. Dax discovers there are other winged women, who have been cast away by God and are depending on Pursiahz. Pursiahz tries to fly away towards the sun, but his wings can't support him and he falls to his death.

Retrieved from "https://heykidscomics.fandom.com/wiki/Eerie_Vol_1_50?oldid=107583"
Community content is available under CC-BY-SA unless otherwise noted.