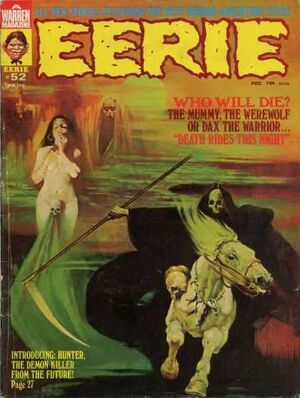 1 of 6
Add photo
Jerome Curry, now permanently stuck in the mummy's body due to the theft of the amulet, pursues the thieves who stole it, leaving his human body in a graveyard. He finds the thieves, but the amulet is already gone, taken by a woman who was with them. Meanwhile his body is found by a crazy woman with a taste for human flesh. Upon his return, finding his mostly eaten body, the Mummy kills her on a spiked fence. Luckily for him, it was actually another body she had eaten and his body is unharmed.

Arthur Lemming comes across a group of gypsies in the woods and stays with them. There he falls in love with a young woman and asks her grandmother to read his fortune. While she's doing it however, the full moon arrives and he turns into the werewolf, running amok. He kills both his lover and the grandmother among many others, but not before she curses him to gain the knowledge of everything that has occurred while in his werewolf form.

Hunter is a half man half demon in the future who battles demons. This first story takes place in a snowy wilderness where Hunter comes across a church and battles three demons within it.

A supernatural expert rents a house haunted by a beheaded ghosts and heads there along with his wife. They soon encounter the headless ghost, and he promises her he'll find her head, which he is fully aware of the location of. The ghost chops off his wife's head and takes it as her own, so he quickly obtains her missing head for her, only for it to be nothing more than a skull, so she retains the wife's head and kills him.

Appearing in "The Golden Kris of Hadji Mohammed"Edit

Synopsis for "The Golden Kris of Hadji Mohammed"Edit

A woman spurns a sultan and steals a sword from him and flees. The sultan sends a man to find her and he eventually does and brings her back to the Sultan, whom she kills. The two end up marrying and having many children.

Appearing in "Death Rides This Night"Edit

Synopsis for "Death Rides This Night"Edit

The story begins at the end of an epic battle where Dax is among the many mortally wounded on the battlefield. Death sends his mistress to obtain their souls, but when she encounters Dax he refuses to go along and gets her to stay along with him. Death punishes her by transforming into a snail like creature that bursts aflame. Death himself now encounters Dax, who is given the option to remain alive or finally die. Dax decides to continue living, but suffers a fate worse than death as he was not aware that he was completely paralyzed from the wounds suffered during the battle.

Retrieved from "https://heykidscomics.fandom.com/wiki/Eerie_Vol_1_52?oldid=107585"
Community content is available under CC-BY-SA unless otherwise noted.