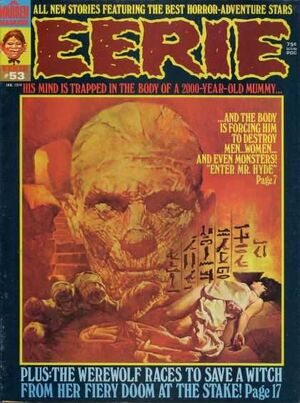 1 of 5
Add photo
Jerome Curry, in the body of the mummy continues to pursue the woman who holds the amulet that can return him to his human form. During this story he encounters Mr. Hyde, a beast like man who has transformed from a normal human. The mummy defeats him and continues on his way.

Appearing in "To Save a Witch's Soul"Edit

Synopsis for "To Save a Witch's Soul"Edit

With his memories restored, Arthur Lemming realizes that he was at fault for his wife going astray and decides to save her from being burned at the stake. Although he's initially locked up, he breaks out and rescues her from execution, and the executioner, the supernatural expert from 2 segments earlier. He brings her to the woods, only to turn into the werewolf once more and kill her!

Appearing in "The Origin of Hunter"Edit

Synopsis for "The Origin of Hunter"Edit

In the year 2001 nuclear war resulted in mutating much of humanity into demons. One such demon, General Ophal raped a human woman, producing the offspring Demien, aka our hero Hunter. After her death from Pox he joins a group of human soldiers and is trained on fighting demons.

Appearing in "First Night of Terror"Edit

Synopsis for "First Night of Terror"Edit

In the future, nuclear testing by the Chinese on the moon has caused a chain reaction that causes most humans on Earth to become white-eyed zombies. By the end of the story his wife Paula has cut off his hand with a cleaver and become a zombie along with his friend Lee.

Appearing in "Spawn of the Dread Thing"Edit

Synopsis for "Spawn of the Dread Thing"Edit

A rather surreal and incomprehensible story about the title character, who fights the 'Dread Thing' and its Spawn.

Retrieved from "https://heykidscomics.fandom.com/wiki/Eerie_Vol_1_53?oldid=107586"
Community content is available under CC-BY-SA unless otherwise noted.