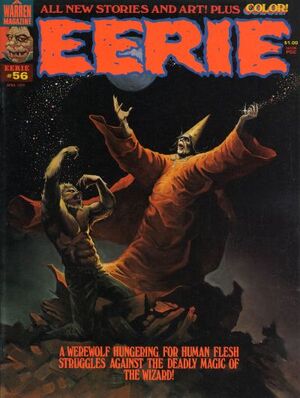 Appearing in "There Was a Were-Mummy"Edit

Synopsis for "There Was a Were-Mummy"Edit

1 of 5
Add photo
Arthur Lemming, now trapped in the body of a mummy, is forced to carry his body around with him in search for an amulet that can return him to his original body. Jerome Curry of the Mummy series also makes a brief cameo during this story, looking for the same thing. Along the way a group of men steal his body and bring it to an old man who seeks to switch to Lemming's much younger body. Lemming arrives in the mummy's body however, turns into a werewolf, and goes on a rampage. Throgmore, the old man's hunchbacked assistant however takes the opportunity to take Lemming's body for his own and as the story ends heads off in it as our hero can only watch in horror.

Hunter comes across a castle filled with demons. There he is captured and thrown in a cell with an old man, who reveals him to be Schreck. The demons had taken over the castle but apparently now there's only 3 or 4 left because of a ghost, the "Princess of Bathory Castle" who has been killing them off. When a demon guard is killed they escape and find her, a little girl, along with a huge nuclear missile.

This humorous tale tells of a man who turns into a werewolf after being bitten by a poodle. He finds the wizard of the title who can help him as long as he isn't doing anything for personal gain. Along the way they meet another werewolf who they help turn human as well.

The story features a young woman, Jan Foley who is being pursued by a cousin who hopes to take the family fortune from her. Luckily for her, "It", a rotting corpse arrives and saves her. The cousin arrives later however and knocks her out, then gets himself married to her and throw her off a boat to her apparent death. Luckily "It" saves her, then kills him. The ending reveals "It" to be dead relative of hers.

Appearing in "The Night of the Red Death"Edit

Synopsis for "The Night of the Red Death"Edit

Sanford continues in his pursuit of Dr. Archaeus, who now sets his site on the third juror, a man who is involved with cock fighting. Sanford thinks that the pattern Archaeus is using is birds, but it ends up being French Henna flowers laced with cholera which kill the juror. This segment also introduces Sanford's lover, Jamaica Jansen who will have more importance in the story a little down the line.

Retrieved from "https://heykidscomics.fandom.com/wiki/Eerie_Vol_1_56?oldid=107589"
Community content is available under CC-BY-SA unless otherwise noted.