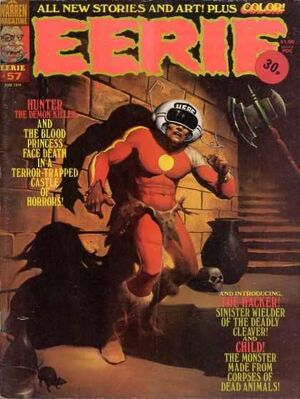 1 of 6
Add photo
The title character encounters a sorceress woman who brings numerous zombies to life. The Spook is able to stop them by throwing her into a fire.

Hunter, along with Schreck and the Blood Princess arm the nuclear warhead to go off in one hour. Hunter heads off to meet with Oephal and have one last confrontation. Scheck and the Blood Princess meanwhile take out the remaining demons and find some weapons. Hunter tries to kill Oephal but finds he is unable to. The bomb fails to go off however, and Oephal kills Hunter, dying seconds later when Schreck kills him. A depressing end, but at the very least Hunter's quest of eliminating the last remaining mutants comes to fruition.

Appearing in "Hide from the Hacker!"Edit

Synopsis for "Hide from the Hacker!"Edit

The story is about the investigation of a serial killer who had been pursued many years before but now seemingly has come back. A pair of detectives search for him to no avail, despite having some suspects. In the end, one of the detectives is decapitated!

The first story tells of Child's origin, how he was created by a scientist who wanted a child after his wife died. Child has many good years with his father but he is eventually killed by the son of his former landlord. Child goes on a rampage and kills him.

Appearing in "The Terror of Foley Mansion!"Edit

Synopsis for "The Terror of Foley Mansion!"Edit

This focuses primarily on a group of robbers who try to steal from the Foley mansion. It comes back from the grave yet again and exacts revenge on them.

Appearing in "A Switch in Time"Edit

Synopsis for "A Switch in Time"Edit

Sanford thinks he's finally figured out Archaeus's pattern, killing people based on the Twelve Nights of Christmas. Archaeus meanwhile still manages to kill yet another juror under his nose by killing another man, then replacing the juror with his corpse in the coffin at a funeral when everyone else is distracted by a bomb he's planted. The juror is then buried alive with no one knowing of his fate.

Retrieved from "https://heykidscomics.fandom.com/wiki/Eerie_Vol_1_57?oldid=107590"
Community content is available under CC-BY-SA unless otherwise noted.