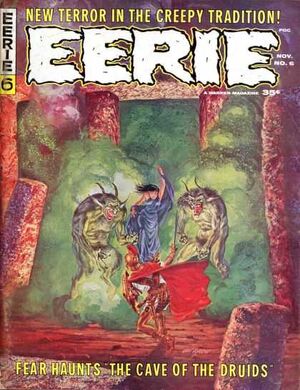 Appearing in "Cave of the Druids!"Edit

Synopsis for "Cave of the Druids!"Edit

1 of 7
Add photo
A gladiator comes across dead soldiers in the woods with their hearts cut out. He discovers that they were removed by a group of druids seeking to resurrect their dead king. By burning the staff possessed by a druid sorceress, the gladiator is able to save himself and leave.

The story features a man on the run from a pair of odd men. Eventually it is revealed that he is dead and they are the undertakers.

Appearing in "The Curse of Kali!"Edit

Synopsis for "The Curse of Kali!"Edit

The story, taking place in the middle east features a man who stops a woman from being sacrificed to the god Kali, so he is cursed, which ends up turning him into a vampire.

Appearing in "Trial by Fire!"Edit

Synopsis for "Trial by Fire!"Edit

A politician's wife is practicing witchcraft and causes multiple enemies of his to fall over dead. Eventually the town ties him up and burns him and he falls on top of her, burning them both.

Appearing in "Point of View!"Edit

Synopsis for "Point of View!"Edit

This story features an insane asylum where one of the patients thinks he's Dr. Frankenstein. After the inmates take over the asylum, he transfers the director's brain into one of the other inmates.

The story features a woman who comes to a mansion to be governess, taking care of a young boy whose father is always busy with research. It ends up that the boy is a Changeling, a demon who replaced the true son and the father spends all his time researching a way to destroy him. A monster, the boy's mother appears, and kills the father, and the house burns to the ground.

Retrieved from "https://heykidscomics.fandom.com/wiki/Eerie_Vol_1_6?oldid=107540"
Community content is available under CC-BY-SA unless otherwise noted.