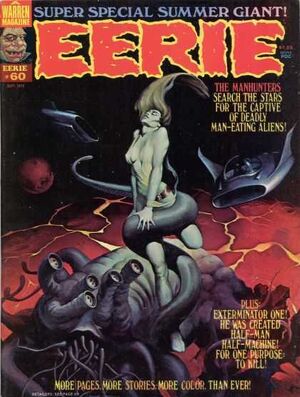 Appearing in "24 Hours To Hell!"Edit

Synopsis for "24 Hours To Hell!"Edit

1 of 7
Add photo
The story surrounds a drug which when taken causes a person to turn into a monster, but kills them after 24 hours. A group of poor old people head to a hotel, lock it up and take the drug, then go on a rampage, killing and raping everyone inside. A newlywed, Garson, witnesses his wife murdered by them, but is one of only two people to survive, the other being Bishop, a man who planned to kill himself but changed his mind when the jackassers went on their rampage.

A young boy is harassed after dark by goblins who want to abduct him.

This story features a robot that used to be a man, who was jailed and given the opportunity to be let out if he becomes a robot assassin. In the future people are only allowed to have kids if they are genetically perfect and he committed the crime of having a kid anyway. It ends up that the planned victim of his is his own daughter. While he can't do it on his own, the computer overrides him and smothers her to death with a pillow.

Child, alone once more, finds a shooting star which leaves a multi-colored spherical object behind. Child finds it and becomes convinced that this will make people love him. But when he hides it and heads off to find food, a boy arrives and steals it, only for it to explode, covering him with weird starfish like aliens. Child becomes upset upon realizing the boy stole his star and kidnaps the boy, planning to get revenge on him. A group of men chase him and fire upon him with shotguns. Child decides instead to forgive the boy and the aliens head onto him instead, killing him.

Appearing in "The Man Hunters"Edit

Synopsis for "The Man Hunters"Edit

The story features a woman on a spaceship with two other men, searching for her husband, who had disappeared months earlier. They arrive on a planet with a tentacled monster, who quickly kill the two men. The monster leads her to a city where it puts a helmet on her which causes her to discover that her husband crashed on this planet and was saved by the monsters, who switched his brain to one of them! She decides to stay on the planet with her husband in his new form.

Appearing in "The Unholy Creation"Edit

Synopsis for "The Unholy Creation"Edit

Another takeoff on the Frankenstein story, this features a man who is about to get married, but cheats on his fiance the night before the wedding. The next day he heads off to the wedding but on the way is beat up and brought to a doctor who transplants his brain into a monster. He takes revenge by killing the doctor and his assistant, but despairs at now being stuck in this form.

Jamaica contacts Sanford about finding where Archeus is, and they are able to break into his apartment and find his ordered list of victims. Archaeus meanwhile remembers that Jamaica is with Sanford, and plots to kill him. He hires a thug to capture Sanford and brings him to a church where he plans to drown him in holy water. Sanford escapes and knocks out the thug, but Archeus is able to kills him with a bow & arrow and hangs his corpse on a crucifix.

"Nightfall" is reprinted in Berni Wrightson Master of the Macabre #3

Retrieved from "https://heykidscomics.fandom.com/wiki/Eerie_Vol_1_60?oldid=107593"
Community content is available under CC-BY-SA unless otherwise noted.