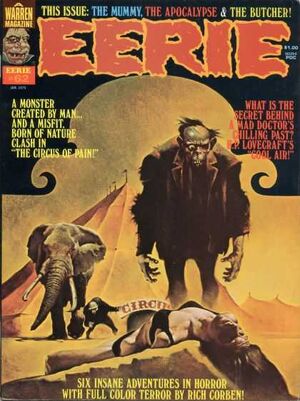 1 of 6
Add photo
This tale chronicles battles from the beginning of man while two chess players compare war to a game.

A dead man keeps himself from decaying by utilizing refrigeration, but when the power fails he rots.

The story surrounds an evil white man who tries to take away some land that was given to some black people. Crackermeyer and the Spook step in to ensure they get to keep the land.

Appearing in "Forgive Us Our Trespasses"Edit

Synopsis for "Forgive Us Our Trespasses"Edit

This gangland melodrama features a crime lord who is killed on his deathbed by assassins hired by one of his sons, hoping to frame a rival crime family. During the murder the priest who was tending the crime lord is mutilated and apparently killed. After hiding out the assassins are all killed... by the priest, who survived the attack and now swears revenge as 'The Butcher'.

Appearing in "Circus Of Pain"Edit

Synopsis for "Circus Of Pain"Edit

This story focuses on Kuzzo, a freak in a circus who is friends with an elephant. The Unholy Creation arrives and does battle with the elephant, killing it. This angers Kuzzo but the two end up becoming friends.

Appearing in "Death Be Proud!"Edit

Synopsis for "Death Be Proud!"Edit

Trogmore, in Arthur Lemming's body continues to live the excesses of life, and kills a young boy. Lemming in his Mummy body is finally able to reach him and knock him out, and is able to use a spell to return to his own body. Only mere moments later the father of the killed boy arrives and kills him.

Retrieved from "https://heykidscomics.fandom.com/wiki/Eerie_Vol_1_62?oldid=107595"
Community content is available under CC-BY-SA unless otherwise noted.