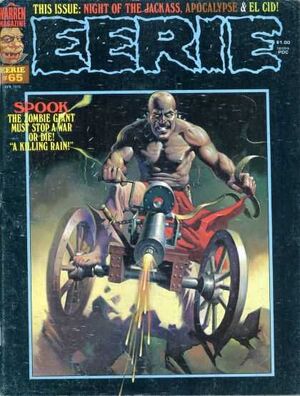 1 of 6
Add photo
Bishop and Garson head to Berthe's lab where she hopes to finish her treatment for the Jackassers. Bishop reads Berthe's notes and realizes that she was the one responsible for creating the Hyde drug. Berthe forces him out, but Garson gets upset and leaves as well, only to find that Bishop has taken the drug and become a jackasser. Bishop goes out of control and attacks them, but Berthe is able to use her antidote which works, turning him back to normal. The series ends here on an optimistic note, with our heroes now having a way to cure the jackassers.

Appearing in "The Hacker is Back"Edit

Synopsis for "The Hacker is Back"Edit

Ten years have passed but the Hacker has returned and started killing again Our hero, Smythe eventually finds out that the man they had locked up years before and let go is still around, and captures him. It ends up he has four collaborators which allowed him to be let go before. Smythe breaks free of his bonds and kills all five of them.

The story moves ahead to the Civil War, with Crackermeyer telling the army from the north that he doesn't want them fighting on behalf of black people. He and the Spook try to stop a battle between Northern and Southern soldiers but fail to and during the battle the Spook is killed, this time for real. It is revealed that the Spook actually was Crackermeyer's younger brother.

Appearing in "El Cid and the Troll"Edit

Synopsis for "El Cid and the Troll"Edit

A troll has been appearing by a bridge, capturing women and holding them for ransom, but never actually giving them back. El Cid is told the story and heads there with a man whose family was taken by the troll. They set up a trap by having the man dress up as a woman. It ends up that the troll was nothing more than an old man, who dies when they attack him upon his arrival.

Death summons the other three horsemen, War, Famine and Plague to see which one is the most dangerous to mankind. All three head out and claim numerous souls for him but he is unable to decide among them. The spectral spirits of children arrive however, ones that the four horsemen are unable to claim.

Retrieved from "https://heykidscomics.fandom.com/wiki/Eerie_Vol_1_65?oldid=107598"
Community content is available under CC-BY-SA unless otherwise noted.