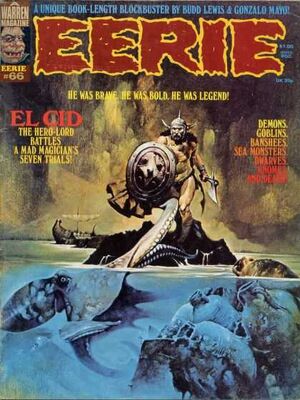 Appearing in "The Seven Trials"Edit

Synopsis for "The Seven Trials"Edit

1 of 4
Add photo
El Cid defeats a sorcerer king in battle, who curses El Cid to suffer from seven trials. El Cid's ship is soon attacked by a group of sirens that they defeat. The last one, a nymph is taken captive by them. More trials start arriving including a dragon, evil dwarfs and others. El Cid falls in love with the nymph but she is killed as the last trial occurs. He awakens on a ship soon after however and realizes it has all been a dream, and that the nymph is alive and well as the nurse who has taken care of him.

Appearing in "El Cid And The Vision"Edit

Synopsis for "El Cid And The Vision"Edit

In this story the Moors have attacked El Cid's kingdom. El Cid encounters a mysterious black knight in the woods that he battles, but the knight vanishes just as he's about to kill El Cid. El Cid then goes to see his king and ends up killing a man who criticizes him. El Cid proposes that he take on the Moor's best knight to determine whether they or the moors will be the victor. The knight ends up being the very knight that he encountered earlier. By using his knowledge of that battle, El Cid is able to defeat him.

Appearing in "The Lady And The Lie"Edit

Synopsis for "The Lady And The Lie"Edit

El Cid encounters two demons, Ahriman and Az, known as the Lie and the Lust. The two demons try to get El Cid to damn himself by killing two imaginary lovers. They try with El Cid yet again later but once again fail. They turn their attention to a woman and get her to kill her lover by making it appear that he is sleeping with another woman. El Cid goes to hell to defeat them and save her.

Appearing in "The Emir Of Aragon"Edit

Synopsis for "The Emir Of Aragon"Edit

El Cid assists in the defeat of the Emir of Aragon and is given a woman, Arias. El Cid brings Arias back to his kingdom with her, but she plots to frame him, sending a letter in his name to get the king to come and see him. Another man comes in the king's place and is killed by her when she enters. El Cid goes to battle and defeats the Emir of Aragon once again, and Arias while fleeing ends up falling on her own knife and dies.

Retrieved from "https://heykidscomics.fandom.com/wiki/Eerie_Vol_1_66?oldid=107599"
Community content is available under CC-BY-SA unless otherwise noted.