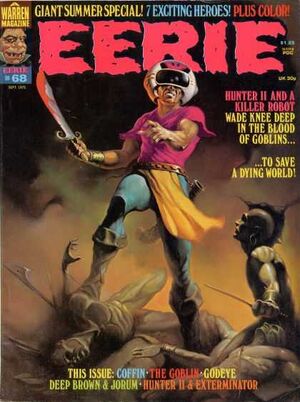 Coffin is found by a traveling caravan run by Halfwalk, a quadruple amputee who sells freaks to various circuses. Coffin is presented as the biggest freak of all, but gets his revenge on Halfwalk, who has the ability to fight even without limbs. Coffin sets him on fire, killing him, and leaves, still hoping for some way to end his own life.

A draft dodger on his way to Canada meets a strange long haired man who transfers him to another dimension when he touches them. There, the draft dodger is hailed as a hero, and called 'Godeye' based on a misunderstanding of something he says. While it seems like the good life at first, Godeye discovers he has to battle a cyclops that has been eating people in the village. While initially scared, Godeye manages to outsmart the cyclops and defeat him.

Appearing in "The Muck Monster"Edit

Synopsis for "The Muck Monster"Edit

A scientist thinks he has failed in his attempt to reanimate the dead, and so he flushes the results down a drain which end up in a cemetery. There, the strange chemicals unite with the soil to spawn a self-aware creature which returns to his creator. The sight drives the man mad and the creature wanders away to ponder his place in the universe.

Appearing in "Deep Brown And Jorum"Edit

Synopsis for "Deep Brown And Jorum"Edit

This story features two rogues, Jorum and Deep Brown who meet when Jorum purchases Deep Brown. The two go on many adventures, which are summarized across five pages. At the end of the story Deep Brown meets his end at the hands of a giant spider.

Retrieved from "https://heykidscomics.fandom.com/wiki/Eerie_Vol_1_68?oldid=107601"
Community content is available under CC-BY-SA unless otherwise noted.