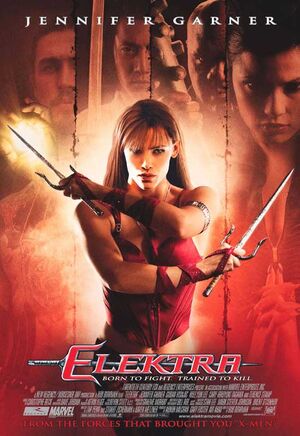 Following the storyline of the Daredevil film, Elektra was mortally wounded by Bullseye. Elektra is revived by her Kimagure master, Stick, who trains her then with his group of ninjas, The Chaste. The Kimagure training is the one which allows controlling past, present, and future, and reviving the death even. However, Elektra is expelled off the group, before finishing her training. And so the story of this movie begins when Elektra is a mythical assassin, slaying DeMarco with one of her Sai daggers, in his own manor.

Elektra is engaged then in a new job to slay a still undisclosed subject. She moves to the area, an insular one, abiding in a big residence. Then, she sympathizes with a 13 year old girl, Abby, by whom Elektra becomes a friend of her father, Mark Miller. However, Elektra's orders arrive and the victims result precisely to be both Miller and his child. Then, the confused Elektra refuses to go on, ready to abandon the area. About boarding the ferry, she perceives some killers around, through her Kimagure intuition. Effectively when she gets to Miller's house, two assassins have gotten there. Elektra stops them, discovering their Order of The Hand affiliation, and then she escapes with Abby and her father.

On the way, Elektra gets to a pool club to meet her master, Stick, who would help against The Hand. She learns that the actual victim is not Mark but Abby, indeed. The child is coveted by the evil members of The Hand, to become one amongst them, because she is the mythical Treasure, a warrior who could tip the balance of good and evil.

The leader of The Hand dispatches his own son, Kirigi, to deal with the intervention of Elektra. Kirigi convenes some powerful henchmen: tattoo (who endows life, to the animal figures which are designed over his skin), Typhoid (who spreads death over all living creatures on her way), Stone (who is of a super strength), Kinkou (who moves with a great speed).

After an eagle of Tattoo spotted Elektra at the pool club, Kirigi finds Elektra, Abby, and Miller, at the farmhouse of McCabe, the man who manages Elektra's assignments usually. McCabe is slain but Elektra and the group reach a nearby forest through an underground passage. Elektra defeats Stone, crushing him timely with a falling tree. With her father, Abby manages to defeat Kinkou. Then, the little girl surprises Elektra showing martial arts skills, and using her large bracelet (Indonesian warrior beads) for an effective weapon vanquishing two wolves of Tattoo. However, Typhoid succeeds affecting Elektra who gets paralyzed by a poisonous kiss of her. Timely, the Kimagure army of Stick arrives and The Hand is routed.

At Stick's camp, Elektra is totally healed and she learns that he would have commanded Elektra to murder Abby. Yet, all was a test which has just been passed. Meanwhile, Abby expresses her sickness being so reclusive amongst the Kimagure, for getting a normal life. Elektra agrees a final duel then with Kirigi. The winner gets Abby.

The duel takes place at Elektra's childhood house. After dispatching a group of ninjas, Elektra faces Kirigi in a room full of flying white clothes. There, she realizes finally that Kirigi had been the killer of her mother. However, Elektra is overwhelmed by his attacks and as she is about to be slain, Abby surprisingly enters into the battle saving her life.

Outside the house, in the green maze yard, also Tattoo and Typhoid confront Elektra. Tattoo unleashes a multitude of serpents which surrounds Abby despite her desperate usage of her special bracelet. Elektra stops him though, breaking his neck. Also, Elektra defeats Kirigi, who is stabbed by her Sai dagger, falling down into a well, to turn into dust at the bottom.

Typhoid, the jealous former Treasure of The Hand, reaches Abby and poisons her. Elektra senses this. She throws one of her Sai daggers through the walls of the maze at her foe, killing her. Quickly, Elektra brings Abby's body into the house and she revives her. This proves that, effectively, Elektra has already become a master of the Kimagure order of Stick.

Just as Daredevil was for Matt Murdock, this film is about Elektra coping with her childhood experiences and putting them behind her.

Elektra is a 2005 movie directed by Rob Bowman. It is a spin-off to the 2003 movie Daredevil, starring Elektra Natchios (played by Garner). Elektra's weapon of choice is the Sai.

Much like the Daredevil film that preceded it, Elektra did not garner the warmest reaction from critics and fans, and it was regarded as a box office failure. It did, however, sell well on DVD. A slightly more polished 2-disc edition director's cut DVD was released in October 2005. On Rotten Tomatoes, ten percent of the critics gave the film a positive review with an average rating of 3.7/10.[2]

One of Elektra's main problems is that many devoted comic book fans felt that Jennifer Garner's portrayal of the sexy Greek assassin was somewhat lackluster and did not capture the spirit of the comic book character. Garner was criticised for being too "girl-next-door", as she is generally seen as the classic "wholesome American girl", whereas Elektra Natchios is an exotic, feral, sexual and often bloodthirsty character. Witty British critics said that "Whereas the comic book character was 'Angelina Jolie', the film character is very much 'Jennifer Aniston'!"

}}
From Marvel Database, a Wikia wiki.

Retrieved from "https://heykidscomics.fandom.com/wiki/Elektra_(film)?oldid=1561604"
Community content is available under CC-BY-SA unless otherwise noted.