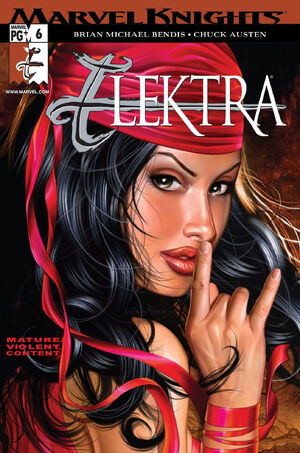 • The second arc of the critically-acclaimed ongoing Elektra series pits Elektra against an enraged Assassin’s Guild.

• After her life-and-death battles with Cape Crow, Bloody Lips, Lady Bullseye and Scalphunter, Elektra vows to take the fight to the Guild itself.

• It’s Elektra vs. the World as she begins hunting down the Guild’s agents before they can find her and her allies.

Retrieved from "https://heykidscomics.fandom.com/wiki/Elektra_Vol_3_6?oldid=1423934"
Community content is available under CC-BY-SA unless otherwise noted.