View source
Part of the 'Running with the Devil' event 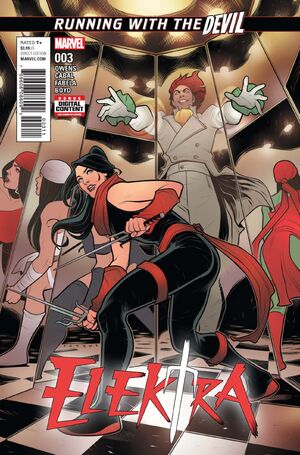 I've won your stupid game, Arcade. Face me for real!

Elektra and her fellow prisoners inside Murderworld run, but Arcade’s players are quickly on top of them. Arcade watches with delight, encouraging the observers to bet on the odds of survival for each “contestant.” As Elektra watches her fellow “contestants” die, she realizes she cannot help them, and flashes back to a battle alongside Matt Murdock where she told him that saving lives and taking lives go hand in hand.

In the present, she arms herself with broken stalks of bamboo and resolves to kill her assailants, and anyone else affiliated with Arcade, in order to stop them from killing others. After slaying all her attackers, Arcade again addresses her as a hologram, saying he’s making a lot of money off of her, and she has leveled-up to the next game. She now has to save her new friend Lauren from execution, and an explosive collar appears on her neck that will kill her if she doesn’t do it in 30 minutes. To further complicate matters, she will also have to fight Screwball.

• While ELEKTRA has tried to lie low, she’s managed to capture the attention of the up-and-coming kingpin, ARCADE…and now he’s captured her!

• However, ELEKTRA hasn’t forgotten her past as an assassin, or any of the skills she’s learned.

• Will it be enough to defeat ARCADE and escape his clutches? Or will she play right into his hand?