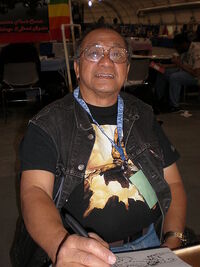 Chan migrated to the United States in 1970, and became a citizen in 1976.[2] For a number of years, he was obliged to work under the name "Ernie Chua" as that name had been wrongfully entered on his U.S. immigration documents, but he was later able to be credited under his given name.[2][3]

He is particularly known for his work on the Marvel Comics version of Conan the Barbarian, although he has also worked for other publishers such as DC Comics, with a long tenure on Batman and Detective Comics. He studied with John Buscema, and also worked with him as the inker on Conan during the 1970s. He also inked the art of Buscema's brother Sal on The Incredible Hulk.

Later, Chan pencilled several issues of Conan and Doctor Strange, and worked on Kull the Destroyer in 1977 and Luke Cage (Power Man) in the 1980s. For DC Comics, he did the Claw the Unconquered series. Chan was also a "go-to" cover artist for DC.[4]

Chan (under the name Chua) was DC Comic's primary cover artist from approximately 1975 to 1977. He followed in an honored lineage that included Curt Swan, Murphy Anderson, Neal Adams, and Nick Cardy. One of Chan's fortés was his ability to compose covers that included multiple characters and yet did not seem "crowded."

His work on Batman was described thus: "Chua provided a more fluent chorography and cinematic flow to the action sequences, especially when he inked his own pencils. What eventually went wrong was that Chua also became DC’s premier cover artist at that time, and the increased workload radically diminished his visual storytelling, making everything appear rushed and relaxed in detail."[5]

Retired from 2002–2008, Chan came out of retirement in 2009 to do pencils and inks for an ongoing web comic series called The Vat.