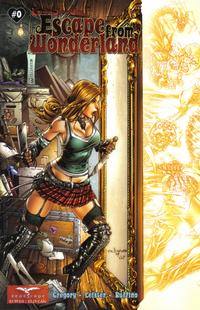 The beginning of the end is here. The final piece to the Wonderland trilogy brings the powerful story of Calie Liddle full circle. Her infant daughter was taken from her arms and brought into the realm of madness. Now Calie must re-enter the one place she has tried for so long to escape. The moment of truth has arrived as the girl who became a woman now sets out to become a hero. The one person who can prevent pure insanity from escaping into this world must now find a way to defeat madness itself.

Retrieved from "https://heykidscomics.fandom.com/wiki/Escape_From_Wonderland_Vol_1_0?oldid=1532979"
Community content is available under CC-BY-SA unless otherwise noted.