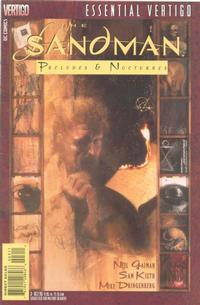 Look, the Sandman's a fairy story you tell kids to get them off to sleep. Sprinkles magic dust in your eyes and brings you... sweet dreams. I'm trying to save the world, Mad Hettie, and you want to tell me fairy stories!

Appearing in "Dream a Little Dream of Me"Edit

Synopsis for "Dream a Little Dream of Me"Edit

A woman named Rachel lies in bed at her house. A withered, bony hand reaches out from the blankets to the nightstand where it grasps at a partially opened bag of sand. This is Dream's sand pouch – a mystical item that was stolen from him decades ago.

In London, hedge mage John Constantine wakes up after suffering a terrible nightmare. He should be used to them by now, having suffered such visions ever since the 1978 debacle at Newcastle. He goes down to Ed Easy Diner for breakfast. The song on the jukebox is about dreams. When he leaves, he encounters a street urchin named Mad Hettie. Hettie warns him that the Sandman has returned. John scoffs and tells her that the Sandman is just a fairy tale. Hettie warns him to heed her words for she is two-hundred and seventy-three years old.

When John returns home he discovers that the Sandman really does exist. Dream stands in his doorway and inquires about his missing bag of sand. John vaguely recalls finding the item at a garage sale many years ago, but doesn't know where it could be now. He tells Dream that they should check an old storage facility that he once leased. They stop at the place, and John finds a photograph of an ex-girlfriend – Rachel. He now recalls that Rachel stole a bunch of his stuff and sold it for drugs. She is the last one that would have known where the pouch is at.

John calls his friend Chas Chandler, and Chas drives John and Dream over to Rachel's father's house in the Brambles. When the enter the house they find that her father has been transformed into a living nightmare – barely alive. Dream knows that this his pouch is definitely here. John enters Rachel's room. She is sitting up in bed and looks terrible. Years of substance abuse have wasted her and she is slowly dying. Dream notices that she has the sand pouch and cites that it is the only thing that has kept her alive until now. John asks him to put her out of her misery. Dream places Rachel into a happy dream where she is young and healthy again. Dream collects his pouch and Rachel dies peacefully.

The pair begin to part company, but John stops Dream to ask for a favor. He describes the nightmares that he has been having, and Dream tells him that his nightmares will now cease.

Retrieved from "https://heykidscomics.fandom.com/wiki/Essential_Vertigo:_Sandman_Vol_1_3?oldid=1495777"
Community content is available under CC-BY-SA unless otherwise noted.