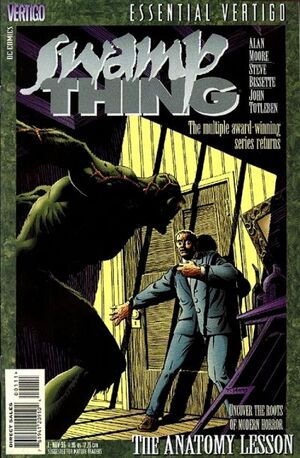 Appearing in "The Anatomy Lesson"Edit

Synopsis for "The Anatomy Lesson"Edit

General Sunderland arranges to have Jason Woodrue, the Floronic Man, released from prison and brought to the Sunderland facility in Washington. There he is instructed to examine the remains of the Swamp Thing and from him, divine the secret of Alec Holland's Bio-Restorative formula. Woodrue detests Sunderland and the fact that he wields so much control over him, but he concedes to the older man’s demands nonetheless.

Jason spends days examining the Swamp Thing; his own vegetative nature gives him a keen insight into the creature's biological structure. While performing a rudimentary autopsy, he finds that the Swamp Thing's body contains non-functional, vegetable versions of normal human organs, such as a heart, brain, liver and kidneys. However, none of them could ever have served any functional purpose due to a lack of any true biological material. He ultimately concludes that the Swamp Thing is not actually Alec Holland, as was previously believed.

Woodrue explains his findings to Sunderland, comparing the Swamp Thing's nature to that of a Planarian worm. He reveals that when Alec's body, doused with the Bio-Restorative formula, came into contact with the swamp, the chemicals reacted with micro-organisms in the environment, producing a unique, yet distinctly separate organism. This organism absorbed the memories and personality of Alec Holland, and in fact, believed that it actually was Alec Holland.

Sunderland has little interest in Woodrue's findings, other than their inherent commercial value. He also has little regard for Woodrue himself, and Jason knows that it is only a matter of time before Sunderland tires of him and sends him back to prison. As Sunderland storms out of his office, Woodrue tampers with the old man's computer, unlocking the doors on the laboratories on the lower level.

What Sunderland never realizes, was that a creature like the Swamp Thing, cannot be killed through conventional means. Swamp Thing eventually wakens from his containment housing and finds Woodrue's notes. Having believed himself to be Alec Holland, he always held onto the hope that one day a cure for his condition might be found, and he could resume a normal life. Now learning the truth, he realizes that all hope is lost, and he flies into a frenzy. The Swamp Thing batters down the doors to the laboratory just as General Sunderland is making his way down the corridor. The creature overtakes the old man and kills him.

Retrieved from "https://heykidscomics.fandom.com/wiki/Essential_Vertigo:_Swamp_Thing_Vol_1_1?oldid=1495780"
Community content is available under CC-BY-SA unless otherwise noted.