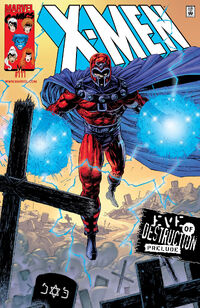 Tilby, a reporter, provides some background on Genosha, the Legacy Virus, Magneto, and their relationships with mutants in general. Cargill, the Genoshan ambassador, delivers Magneto's ultimatum to the United Nations: the other governments of the world must cease their discrimination against and persecution of mutants; otherwise, Magneto and his army will overthrow them, and if necessary, exterminate all nonmutants. Quicksilver, a revolutionary on Genosha, has been mindwiped and exiled. Xavier is kidnapped.[1]

Grey recruits Cargill (after her capture and interrogation by the US government), Northstar, Wraith, Omerta, and Sunpyre to replace the current X-Men (busy in X-Treme X-Men). This team will attempt to rescue Xavier from Magneto, possibly with help from Cyclops and Wolverine, who have already infiltrated Genosha. As they prepare to leave, Dazzler arrives.[2]

Magneto addresses his troops. Meanwhile, Cyclops and Wolverine are working with refugees in the sewers and find an old comrade, Polaris. To get the refugees out of the sewers and on their way to Wakanda, they must get through the Blob, Random, and a detachment of the Homo Sapiens Liberation Army. Meanwhile, Grey's group leaves the Xavier Institute in their jet.[3]

During their flight, Grey suggests a telepathically induced training session, using Dazzler as the focus. Her reason for seeking out the X-Men, it develops, was the death of Longshot and the destruction of the Mojoverse. When they reach Genosha, Magneto tears their jet apart and brings them to earth in front of his army. Dazzler sees Xavier crucified in the square, assaults Magneto, and is killed.[4]

Omerta attacks first; Magneto immobilizes him but can't get through his invulnerability. Northstar attacks next; Magneto flings Omerta into the stratosphere so that Northstar must retrieve him. Cargill attacks from hiding; Magneto wraps her in pipes. Sunpyre attacks; Magneto barely holds his own but beats her. Wraith, at close quarters, causes Magneto's skin to disappear, which disconcerts him momentarily. Cyclops and Wolverine arrive; Cyclops is immediately rendered hors de combat, while Wolverine is immobilized because of his metal skeleton. Thanks to a holographic ruse by Dazzler, however, Voght and Grey have freed Xavier, who suppresses Magneto's powers. While the others decide what to do with Magneto, Wolverine neatly solves the problem by stabbing him. The mutants that Grey recruited decline to stay with the team.[5]

Retrieved from "https://heykidscomics.fandom.com/wiki/Eve_of_Destruction?oldid=1579543"
Community content is available under CC-BY-SA unless otherwise noted.