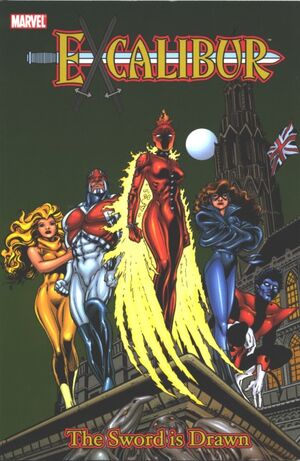 Appearing in "The Sword is Drawn"Edit

Synopsis for "The Sword is Drawn"Edit

X-Men Abroad!
Believing the X-Men to be dead, Nightcrawler and Shadowcat vow to keep the dream alive alongside Captain Britain and the metamorphic Meggan - but the Warwolves have Phoenix on the run, and she leads them to London, right into the formation of the X-Men's first foreign franchise! The Warwolves are on our heroes like a cheap suit (or is it the other way around?), and the labyrinthine plots ensue! Aliens, intrigue and Arcade! The mystery of the Hellfire Club's Courtney Ross begins here! Guest-starring the Juggernaut!

Retrieved from "https://heykidscomics.fandom.com/wiki/Excalibur_Classic_Vol_1_1?oldid=1549364"
Community content is available under CC-BY-SA unless otherwise noted.