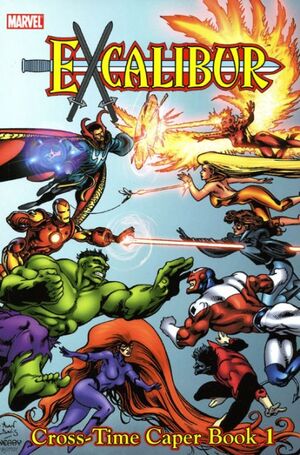 England's premier super-team takes their show on the road as their interdimensional odyssey begins, leaving their earthly enemies to the tenacious Technet! Plus: From the pages of Captain Britain's original series, see Jamie Braddock at the beginning of his reality-wrecking career! Guest-starring nearly every hero and villain in the Marvel Universe- or very unreasonable facsimiles thereof!

Retrieved from "https://heykidscomics.fandom.com/wiki/Excalibur_Classic_Vol_1_3?oldid=1432458"
Community content is available under CC-BY-SA unless otherwise noted.