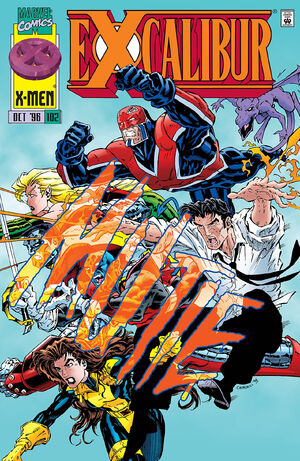 Appearing in "After the Bomb"Edit

Synopsis for "After the Bomb"Edit

The team are in various locations. Moira, Kurt, Brian and Meggan are on the Muir island station discussing the disappearances of famous super heroes. Wisdom and Kitty are at a diner on the mainland getting breakfast and reading an article about excalibur in a newspaper. Rahne, Colossus and Rachel are tracking down Amanda Sefton in the German countryside. Back at Muir island the British government are taking away some of the mutants being held at the island. The trio in Germany search a cabin for Sefton but find no trace, when they hear a deranged cackling. As Pete and Kitty leave the diner they are attacked by US government men warning that they are not welcome in the States. The teams return to the base and hand over the leader of the attackers to the British government men claiming him to be 'The Crimson Goatgouger'. With Excalibur all back at base Wisdom and Shadowcat recount the tale and Moira informs them that Charles Xavier has also been taken into police custordy. Pete and Kitty leave to go to the pub while the others fret about the issue.

Retrieved from "https://heykidscomics.fandom.com/wiki/Excalibur_Vol_1_102?oldid=1498939"
Community content is available under CC-BY-SA unless otherwise noted.