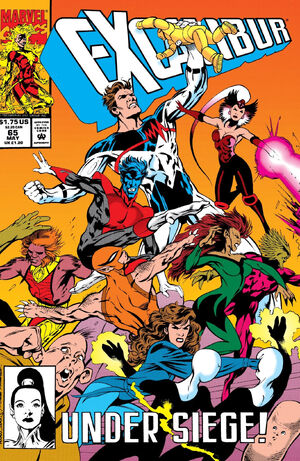 The great Captain Britain! Humbly praying for the life of his idiot concubine. Desperate to atone for the injury he believes he has caused. Prepared to follow anyone who might lead him from his pit of guilt and misery. Pathetic, isn't he? But I will mold him. I will put iron in his spine. I will forge him into the true patriotic symbol or our great land.

Retrieved from "https://heykidscomics.fandom.com/wiki/Excalibur_Vol_1_65?oldid=1505783"
Community content is available under CC-BY-SA unless otherwise noted.