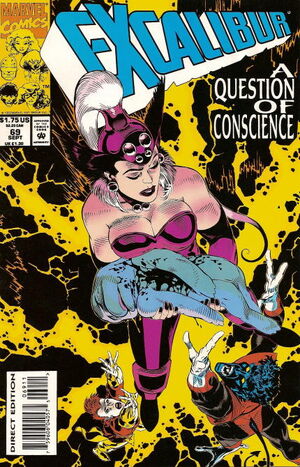 Wait..Is this the part where I scream "No don't kill me, I'm too young to die?"

Appearing in "Blight and Fog"Edit

Synopsis for "Blight and Fog"Edit

Cerise recalls landing on the Knsashii home world. She finds that her Shi'ar army has killed all the inhabitants of their capitol city. She is angered by this and approaches her leader, C'efn. He tells her that it was not a "conversion" mission but a slaughter and the ones that do survive will be more than happy to "convert" to the Shi'ar. He then shoots one of the innocent Knsashii that is at his feet. She realizes that she is going to have to stop this killing. In the present, Cerise is kicked into a cell. She is in a holding area with other Shi'ar prisoners and is going to be transported down to the actual prison named Krag.

On the Starjammer ship, Nightcrawler and Micromax teleport onboard through the garbage chute. The hatch closes and they barely make it in from the vacuum of space. They plan to hitch a ride on the ship to the Shi'ar space to look for Cerise. Nightcrawler believes her to be innocent and he tries to convince Micromax that you cannot take everything at face value.

At Braddock Manor, Meggan sits along a waterfall. She is saddened at the loss of Brian and has turned herself into a being of water. Shadowcat tries to convince her to snap out of her depression and to come back to the manor. Feron watches on as Kitty loses control of her temper and her powers and gets soaked by the waterfall. She storms off an Feron gives a go at trying to reach Meggan.

Near the entrance to Krag, Kylun and Phoenix watch on as Cerise is sent below to Krag. They try to go after her and are stopped by a guard. Phoenix tries to use mind-control powers like Obi-Wan off of "Star Wars". The guard doesn't fall for the ploy and rips off her disguise. The prisoners see the emblem of the Phoenix on her clothes and are scared.

On the planet surface, guards go to stop Phoenix and Kylun. They battle and Phoenix picks up a thought pattern of a very "alien" being on the prison transport platform. Then one of the prisoners yell at them to stop and everyone freezes. The prisoner goes to touch her face and says that Phoenix wears the emblem but does not fill the clothes of the Phoenix. Everyone suddenly goes back to their business and the battle is over. The Starjammers appear and they go to the transport platform to rescue Cerise.

On Krag, Cerise tends to Cryan and a lizard-like being watches on. He finds the attempt at courtesy to Cryan "touching" and goes to tell Cerise how he feels about this. He yells at Cerise and mocks her for being so kind. Cerise disregards him and he grabs Cryan. Cerise kicks him and he goes flying and lands hard, cracking his neck. The prisoners look on scared. Cerise says he made a decision to attack Cryan and paid the price for it.

Meanwhile, the Starjammers and gang step onto the platform and threaten the guard to take them to Krag. Corsair tells the guard to wait and has him call up the evidence log that was used at Cerise's trial. The guard complies and shows the team a hologram of how Cerise transmitted a message saying that she was going to kill everyone on board her ship for murdering innocent Knsashii aliens. Corsair then tells them that this evidence was used to try Cerise, in absentia, for the deaths of the Shi'ar soldiers. The Shi'ar just recently found Cerise on Earth and this is why she was made a prisoner. Nightcrawler refuses to let this stop him from saving Cerise and the teleport below to Krag, where Cerise and Cryan try to brave the strong winds. Above them, Fang watches on menacingly.

Retrieved from "https://heykidscomics.fandom.com/wiki/Excalibur_Vol_1_69?oldid=1546891"
Community content is available under CC-BY-SA unless otherwise noted.