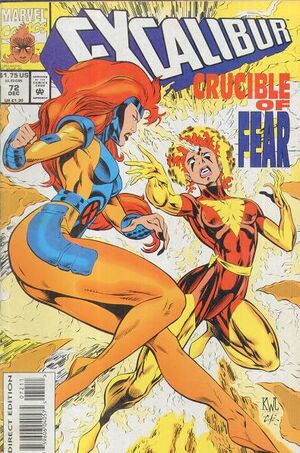 No matter what I did, they wouldn't die. I call that bad manners.

The Gamesmaster plans out the next game. An unknown person tells the plans to Gamesmaster and says that the game involves Moira MacTaggart and her son. The figure says that it is wanting to get a bit of Proteus' DNA from Muir Island's research center. Gamesmaster tells the person that it will get it what it wants and this will allow him to create a game for his Upstarts in doing this.

Moira trains the members of Excalibur by using a virtual computer. She tests each of the mutants to see how they react to their darkest fears. She also thinks to herself about her new house guests are making her feel. She hopes that Rory Campbell will help put her mind at ease since Professor X recommended him to help Moira in her studies of the Legacy virus.

The simulations begin and the first up is Rachel. She sees a virtual being of Jean Grey. Jean tells Rachel that she is no daughter of hers and hits her with a psionic blast. Nightcrawler, meanwhile, is teleporting around and during some explosions teleports himself into solid rock. Shadowcat walks around and finds Colossus. She tries to phase him and cannot. He grabs her throat and tells her that she betrayed him.

Gamesmaster brings in the person he is assigning to this game. Siena Blaze asks him what is the plan. He tells her that the plan is to get Proteus' DNA. She may have to attack Moira to get this. Siena wonders if there will be any points in killing a non-mutant and the Gamesmaster says he will count it as killing a potential mutant.

At Muir Island, Moira stops the simulations when she sees the pain she is causing the team. She apologizes and the team goes to get some food. They thank Moira for her hospitality and she gives them some porridge. Rachel does not eat any as it reminds her of the slop she got in Ahab's pens when she was growing up. Moira then tells the team about her son Proteus and what he did and how he was stopped. Shadowcat then tells everyone that she is going to unpack and try to find Lockheed.

Later, the team is outside and hears an explosion. They look off to the horizon and see a huge fire in the ocean and a lot of black smoke. Rachel picks up Shadowcat and they fly off towards the smoke while Nightcrawler teleports there. It seems that there was a large explosion on an oil rig. Nightcrawler saves the pilots of a helicopter that was blown up during the explosion. Rachel psi-links to Kurt and asks him how it is going. He tells her that it is bad. Shadowcat walks around the rig looking for survivors and gets rafts to those in the sea. Phoenix then puts out the fire on the rig. They realize that the explosion was not natural and Rachel thinks it was deliberately done. Rachel then lifts the people in the rafts to take them to safety. Nightcrawler looks up and sees a person flying toward the research center and he feels that this was some sort of diversion.

Meanwhile, on the Isle of Lewis, a man named Rory Campbell is setting up a deal with a local ferryman to try to pick up a boat that Professor X got for him to go to Muir Island. The boat owner gets a look of fear in his eyes and says that Muir Island is cursed and no boatmen would take him to that island. Rory tells him that he would double the rent of the boat.

On Muir, Siena Blaze lands and enters the center. Nightcrawler tells Shadowcat that the oil rig was a diversion and they teleport to the island. Inside, Siena Blaze finds Moira and says she wants Proteus' DNA. Moira tells her no and then says that Siena will have to kill her first. Siena kindly means to oblige. Nightcrawler and Shadowcat try to teleport to where Moira is located and Siena senses the electromagnetic changes that Kurt's teleportation "Bamf" causes. She moves the EM field and Shadowcat and Nightcrawler begin to materialize into solid rock and Shadowcat screams out in horror.

Retrieved from "https://heykidscomics.fandom.com/wiki/Excalibur_Vol_1_72?oldid=1423515"
Community content is available under CC-BY-SA unless otherwise noted.