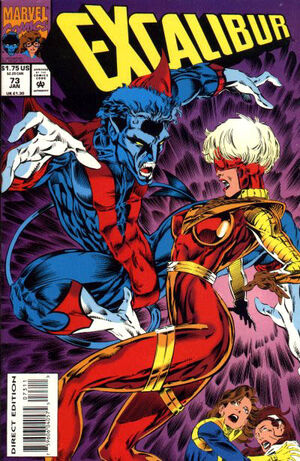 Appearing in "Memories Are Made of This"Edit

Synopsis for "Memories Are Made of This"Edit

Shadowcat and Nightcrawler are finding themselves teleporting into solid rock deep inside Muir Island. Shadowcat screams out to Kurt. Outside, the winds are howling and the sea is churning as Siena Blaze's recent attacks are causing a disruption in the climate around the island. A man clings to life as he swims toward the island. Shadowcat grabs Kurt and they phase out of the rock and into the building. Kurt is still in shock and Kitty turns to see Siena Blaze standing over Moira.

Meanwhile, above the Earth, Rachel surveys the damage that Siena's attack caused to the ozone layer. She tries to use her Phoenix powers to try to mend the holes that Siena has caused. She drains herself and yet continues to push her limits. She finally collapses and falls back towards the Earth. She hits the ground and is knocked unconscious. She dreams of Cable and sees visions of her past and even her future. She then feels a presence behind her of Captain Britain. She yells out to Askani'son to help her.

Rory Campbell turns out to be the person that has come ashore. He clings onto the rocks below the island's cliffs and then remembers how he got here. He had purchased a boat from a sailor and then while out at sea there was a storm and his boat was crashed under many waves and then he has found himself washed up to Muir Island.

Siena Blaze confronts Moira, Shadowcat and Nightcrawler. Kurt tries to get her distracted while Kitty grabs Moira and phases her to another room and to safety. Siena realizes that Moira is gone and says that she will not get away that easily. She then emits a huge energy blast that blows up a good portion of the center. The tremors are felt back on the mainland.

Rachel wakes up at this moment and realizes that more damage has been done to the environment and thinks that she must stop this being that is responsible for the damage. She starts to make her way to standing up and is taken over by a time-ripple and her arms turn into Captain Britain's. She screams out that she cannot allow him to take over and then the transformation stops. She does not seem to recall what just happened and starts to work her way to getting back to Muir Island.

Siena Blaze makes her way into a room that holds the CD she has come here for. She finds the CD that has the genetic code for Proteus' DNA on it and grabs it. Moira enters and holds a gun to Siena. Nightcrawler teleports between Moira and Siena and this allows Siena to be distracted while Shadowcat phases up through the floor and grabs the CD. Kurt then knocks Siena to the ground. Rachel arrives and Siena tries to blast her but Rachel uses her powers to snuff out Siena.

Siena sits up and claws at Phoenix's face and catches her face. Rachel punches her back. She then senses a person needing help outside on the rocks. This distracts her enough so that Siena recovers and uses her powers on Rachel. Siena then says that Excalibur proved a better fight than she had thought they would be and vanishes.

The team rushes outside to try to help the man, Rory, on the rocks. Shadowcat drops off the CD with Moira. Moira quickly recalls why she created the CD and swears that she did not think that it would later try to be used to recreate her son and his powers. Nightcrawler jumps in a rescue vehicle and finds the Rory climbing up the rocks. Rory passes out.

He later awakens on an examination table and realizes where he is. He asks Moira to let him up since he is not used to being on this side of the table and she tells him to stay. He asks to meet those who saved him and Rachel who sensed he was there. They first meet and Shadowcat leaves to tell the X-Men about Siena's attack. Rachel seems to be physically interested in Rory and thinks to herself that she will see personally to his recovery. Shadowcat goes to another room and checks on Meggan's recovery. She finds her and Meggan turns to show that she has transformed into a monster and she growls at Shadowcat.

Retrieved from "https://heykidscomics.fandom.com/wiki/Excalibur_Vol_1_73?oldid=1550279"
Community content is available under CC-BY-SA unless otherwise noted.