Part of the 'The Douglock Chronicles' story arc 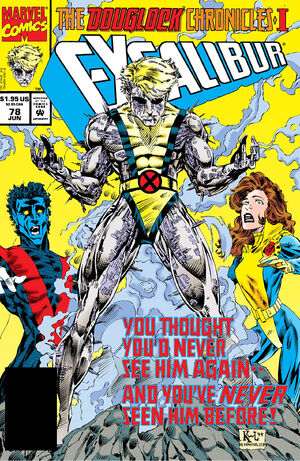 Appearing in "Fire in the Wild"Edit

Synopsis for "Fire in the Wild"Edit

Zero meets with Douglock whom he has just freed from the Phalanx collective. He is trying to teach him of his surroundings and one of the steps is to learn what fire is. Douglock tries to resist the pull of the Phalanx collective on his thoughts and he finally realizes that he is his own being. Douglock joins Zero to go find their purpose in this world and they leave the cave and walk out into the woods.

Britanic, Meggan, and Shadowcat fly towards Maine. Britanic cannot figure why he was compelled to come to this place. Shadowcat makes a quick call to her mother to try to find out what her father was calling her about recently. Her mother says that she has not heard from him in months. They hang up and Britanic continues to try to learn what his reasons for coming here were. Meggan says there is a family nearby and Brian tells her that one family does not concern him and his mission will affect everyone on the planet.

In Maine, the family of humans are camping. The young girl, Courtney, runs off into the woods and runs into Zero. He picks up her doll that she dropped and she smiles and runs off. Zero tells Douglock that he must reach sentience and he shows him visions of his past and how he was killed. While they talk, Stryfe's robots attack and learn that to get Zero they must kill the humans and he will come out into the open. Excalibur arrives just in time and stops them from killing anyone. Douglock helps them and he appears more like Doug Ramsey now. Shadowcat is stunned that he is still alive and then she realizes that he has changed. Zero blows up a majority of the robots and more continue to come. He then teleports everyone present away and the robots continue their pursuit.

Retrieved from "https://heykidscomics.fandom.com/wiki/Excalibur_Vol_1_78?oldid=1423521"
Community content is available under CC-BY-SA unless otherwise noted.