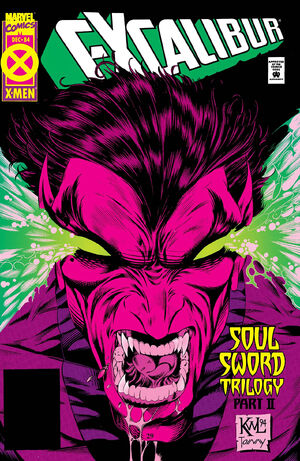 Shadowcat stands over Moira and threatens to kill her with the newly reacquired Soulsword. Nightcrawler teleports into the room and tells her to give him the sword. No one knows he has just been possessed by the sorcerer Gravemoss. Meggan also enters the room and Shadowcat says she will kill them all. Brian crashes through the wall and grabs her. He jabs her in the neck and makes her pass out and the sword falls to the ground. Nightcrawler grabs for it but it flies back into Shadowcat's body and then Meggan goes into convulsions. Moira takes them all to the medical labs. Storm clouds gather around Muir Island and a storm is brewing.

In London, Shrill learns that the Soulsword has been sheathed again. Her brooch that contains a fleck of soulsteel will point her in the right direction to find the Soulsword. She looks at the brooch and sees that it honed in on Muir Island. She readies to go get the sword and she will try to destroy the sword or the holder of the sword. She then creates a spell to transport her there.

Gravemoss, as Nightcrawler, hides on a cliff outside the Muir center. He plots of a way to get the sword quickly before Nightcrawler's body rejects him. Suddenly, a teleport gate opens and Amanda steps out. Gravemoss greets her formally and she does not know it is not Nightcrawler but she notices the attitude in the voice. He changes tactic and she tells him that she is there to help Kitty. He uses Brian's neck-tap and knocks her out. He then tosses her over a cliff.

Moira discusses the Soulsword with Professor X. They try to come up with an idea of how it transferred from Illyana to Kitty's body. He shows a video of her before she passed away and they see an energy signature that would be when the Soulsword integrated into Kitty. Rory joins the discussion and then the fire alarms go off in Douglock's room. They all run off to see about the alarms and leave Kitty and Meggan in the lab unconscious.

They arrive in Douglock's room to find Douglock on fire and he goes into a system crash. Gravemoss, as Nightcrawler, stands over him and says he just came in and found him like this. Moira says she cannot touch Douglock or she will be infected with the transmode virus. Gravemoss senses Xavier is a psychic and knows he cannot be caught or it's over and he comes up with an idea.

Shadowcat wakes up in the med lab and remembers pulling out the Soulsword and punching Moira while smoking but does not know why she did it. She gets out of the bed and unsheathes the sword inside of her. Shadowcat turns and sees Shrill. Shrill mentions that she is reduced to this figure or worse when the Soulsword is drawn and that she once almost got the sword from the demon Darkoth.[1] She then says that she regrettably must kill Shadowcat since she cannot have the sword unsheathed again. Nightcrawler appears and Kitty that he can save her if she gives him the sword. Shadowcat realizes he is not himself and then cannot decide what to do and wonders where the others are. Unknown to her, they are unconscious in Douglock's room.

Retrieved from "https://heykidscomics.fandom.com/wiki/Excalibur_Vol_1_84?oldid=1423527"
Community content is available under CC-BY-SA unless otherwise noted.