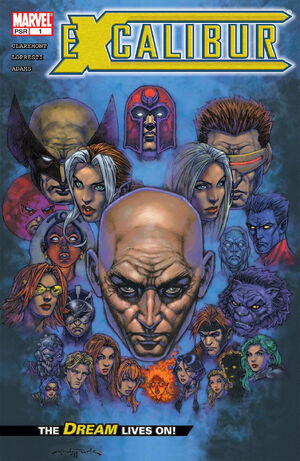 My name is Charles Xavier. I am a mutant. And once upon a time I had a dream... of a world where all Earth's children, both mutant and baseline human, might live together in peace. This isn't it. This is today's reality.

Appearing in "Forging the Sword - Part 1: Paint It Black!"Edit

Synopsis for "Forging the Sword - Part 1: Paint It Black!"Edit

Arriving on Genosha after the supposed death of Magneto in New X-Men ????, Professor X sets about to discover who remains on Genosha. Genosha is under a quarantine and Professor X must rely on himself to survive in the destroyed island. He carries with him a coffin, which people suspect contains Magneto's body, but which actually carries food, water, weapons, and several high tech devices. When he discovers that these electronics do not work on Genosha, the Professor struggles to move the coffin across the island by brute force. He has a conversation in his mind with Moira MacTaggert who questions his motives. Professor X doubts his successes as a teacher and leader of the X-Men. While traveling across the island, he meets Wicked who assists him in moving the coffin. Soon, they are attacked by Genosha refugees, led by Unus the Untouchable. Professor X stops most of the assailants but cannot affect Unus. However, Wicked's friend and fellow mutant, Freakshow, arrives to help. He transforms into a large monster and eats Unus alive. Professor X assures Freakshow that Unus will be fine because of his mutant powers. Professor X finally arrives at his destination where he he sends the two teenagers away to rest. The Professor then meets with his old friend and nemesis, a very alive Magneto.

Retrieved from "https://heykidscomics.fandom.com/wiki/Excalibur_Vol_3_1?oldid=1544474"
Community content is available under CC-BY-SA unless otherwise noted.