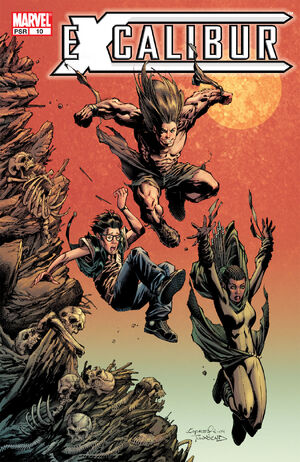 "My dear old friend, I ask you--beg you--save the life of my child. If you can, Charles, help me save her very soul! Mine, I fear, as you can see... is already and forever DAMNED!"

After Dark Beast comes to the camp injured, Callisto sends Hub to get a medkit from Xavier's house. When Hub teleports there, however, she is blocked by a force field which Magneto has set up. He gives Hub the medkit and commands her to bring Xavier to him.

Callisto, meanwhile, convinces Hub to send her ghosts into the underground tunnels to find Dark Beast's assailant. Although the ghosts are attacked, Callisto and Karima Shapandar venture underground to investigate. They find the bodies of the Magistrates and are quickly attacked by Sugar Man and one of his creations, Rastus.

During the fight, Sugar Man impales Karima and she discovers that her modified body will repair itself using micro-molecular machines. Rastus bites off one of Callisto's sets of tentacled arms, after which Karima shoots him. Callisto then drives a metal pipe through Sugar Man's head.

Meanwhile, Professor X arrives back at the house where Magneto has once again donned his villainous costume. Magneto then asks his friend to help his daughter, Scarlet Witch.

Retrieved from "https://heykidscomics.fandom.com/wiki/Excalibur_Vol_3_10?oldid=1423582"
Community content is available under CC-BY-SA unless otherwise noted.