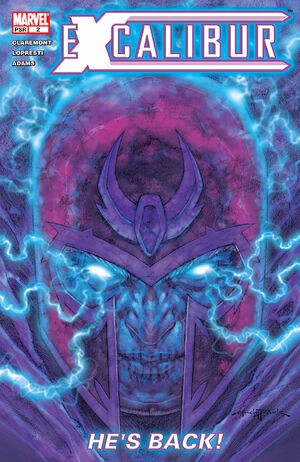 I gave the kid a pretty solid shock, Chucky. How 'bout you use your mental magic to check her out and make things better?
How irresistibly you put things, Callisto.

Appearing in "Forging the Sword - Part 2: With a Little Help From My Friends"Edit


Synopsis for "Forging the Sword - Part 2: With a Little Help From My Friends"Edit

Professor X and Magneto continue their discussion of the current state of mutant affairs when they are interrupted by the arrival of Callisto. She attacks Magneto with ceramic blades which are immune to his powers. Wicked intervenes by summoning her ghosts, which Callisto quickly dispatches. Freakshow comes to Wicked's aid, but is stalled in his attack when he regurgitates Unus, whom he swallowed in the previous issue. Unus runs away and returns to his team which is hiding out in the statue of Magneto and Professor X. Callisto decides to stick around on Genosha and assist Magneto and the Professor with their efforts. Meanwhile, in Unus' hideout, the teleporter Hub receives a telepathic visit from her friend Hack who warns her of an impending attack from an Omega Sentinel.

Retrieved from "https://heykidscomics.fandom.com/wiki/Excalibur_Vol_3_2?oldid=1538033"
Community content is available under CC-BY-SA unless otherwise noted.