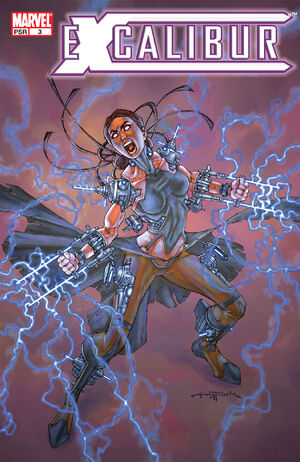 "Positively Pavlovian, your response to certain stimuli. Such predictability will be the death of you."

Professor X falls victim to a psychic attack when he inadvertently links with the thoughts of Karima Shapandar, an Omega Sentinel. He overcomes the attack with the aid of his telepathic illusion of Moira MacTaggert. In Unus's hideout, Hub continues her conversation with Hack who warned her of the arrival of the Omega Sentinel.
Hub and Hack teleport to the hideout of their boss, Chimere who isn't there. Instead, they meet up with Purge and teleport onto an arriving airplane. On the plane they discover two canisters which contain Shola Inkose and Karima Sharpandar, as well as a full group of Magistrates. In their attempt to take over the plane, they cause an explosion which sends the plane plummeting into Hammer Bay. The crash attracts the attention of the other island inhabitants, who rush to aid the crash survivors. Professor X and Magneto dive into the bay to rescue one container while Wicked and Freakshow are attacked by Magistrates.

Retrieved from "https://heykidscomics.fandom.com/wiki/Excalibur_Vol_3_3?oldid=1493646"
Community content is available under CC-BY-SA unless otherwise noted.