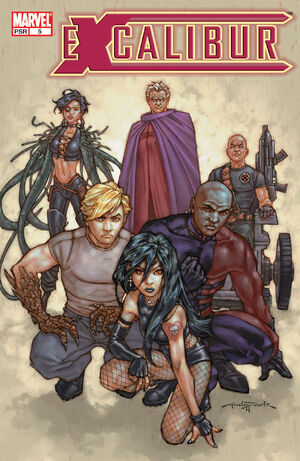 "There is a moment when I pray it's the lightning that wakes me. But from the start I know that isn't true."

Professor X is awakened by the knowledge that various X-Corps branches around the Indian Ocean Rim have been attacked. He visits those locations in his astral form to encourage and assist various X-Men who are in danger. He attempts to discover who was behind the attacks, but cannot, although he sees the image of a grey crow. Callisto comes to help him after she hears him scream and they discuss what the vision means.
Shola Inkose, meanwhile, is outside running as he relives the final moments of the Genoshan Massacre in his mind. He finally collapses and is aided by Wicked before they are both attacked by Trolls and injected with Neutralizer Nannites which block their mutant powers. Professor X and Callisto are also attacked, as are Magneto and Karima Shapandar. Once the heroes are neutralized, their assailant reveals himself as the treasure hunter, Stripmine who is backed up by three Trolls.

Retrieved from "https://heykidscomics.fandom.com/wiki/Excalibur_Vol_3_5?oldid=1423577"
Community content is available under CC-BY-SA unless otherwise noted.