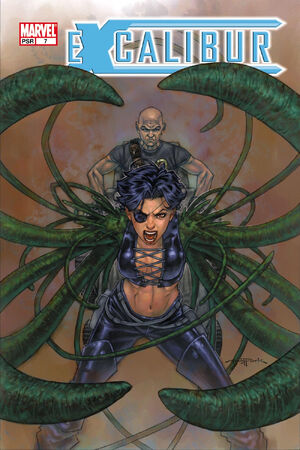 "Welcome to the Republic of Genosha. This is all it takes, really. Two hands clasped in fellowship, pledging to build something better."

Dark Beast appears from his hiding on Genosha and talk with Stripmine and Appraiser as his shackles Shola Inkose and Karima Shapandar to a wall. As he inspects Karima, he discusses his plans with Stripmine while he plays Schubert.
Outside, Magneto and Professor X discuss what to do with the Troll they have captured with Callisto's help. Magneto hears the music Dark Beast is playing and it reminds him of his time in Auschwitz. Freakshow arrives from his fight with the trolls and Magneto removes the Nannite pellet which Freakshow was shot with. The heroes discover that Magneto's power can neutralize the Nannites and restore their powers. Although weak, they formulate a plan for rescuing their teammates.
When the remaining Trolls come looking for their missing companion, they are attacked by Callisto, Freakshow, and Professor X. While Magneto stays with Wicked, the others attack Stripmine and Appraiser. Freakshow changes shape into a Troll and Xavier attacks with a sling and Nannite capsules. Dark Beast captures Freakshow and the adversaries are at a standoff until Wicked's ghosts arrive to free Karima, who captures and arrests all of the bad guys.
At the end of the issue, Charles and Magneto to form a government to care for the citizens of Genosha.

One of the Trolls is named "Yalo".

Retrieved from "https://heykidscomics.fandom.com/wiki/Excalibur_Vol_3_7?oldid=1423579"
Community content is available under CC-BY-SA unless otherwise noted.