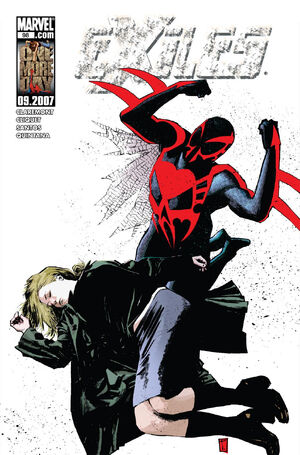 While Psylocke and Cat Pryde are fighting off an army of intruders, the team is faced with the shocking truth of the rivalry between this Earth’s Victor Von Doom and Reed Richards. Plus, Miguel O'Hara (Spider-Man 2099) and Gwen Stacy's relationship is taken to the edge.

Retrieved from "https://heykidscomics.fandom.com/wiki/Exiles_Vol_1_98?oldid=1423684"
Community content is available under CC-BY-SA unless otherwise noted.