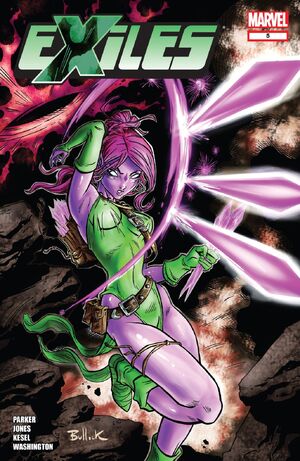 Whenever you see a Sentinel, do you think 'Oh, yeah, that head would fly great'? I'm still trying to figure out what I'm doing up here besides looking good. Which I do.

Appearing in "The Humans are Dead"[1]Edit

Trapped in what will soon be a purely robotic world, The Exiles find out that drastic steps were taken to save humanity, and even machines can have secrets! But one of the Exiles has a secret too - one that can destroy the whole mission when revealed. (And Morph finally pokes his head back in!)

Retrieved from "https://heykidscomics.fandom.com/wiki/Exiles_Vol_2_5?oldid=1423691"
Community content is available under CC-BY-SA unless otherwise noted.