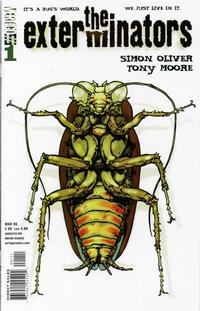 The simplest way to personal divinity... is to accept one's own vile and reprehensible nature.

Appearing in "Bug Brothers (Part I of V)"Edit

Synopsis for "Bug Brothers (Part I of V)"Edit

Henry James, fresh out of prison, has just joined the Bug-Bee-Gone extermination company. He is partnered with a foul-mouthed man named A.J. A.J. shows him the ropes and the two clean out a tenement building in Los Angeles.

Meanwhile, a scientist named Saloth Sar collects a discarded sample of the pest control chemical known as Draxx. He brings it to Bug-Bee-Gone's CEO Nils Peterson for analysis.

While working a job, Henry and A.J. encounter a rat that is several times larger than a normal rat should be. A.J. hurls his hunting knife at it and pins it against a wall. Later, Henry exterminates a building and finds a giant, rabid raccoon. He panics and eviscerates the animal in a momentary bout of fury.

After hours, A.J. sits in the bathroom and begins intravenously injecting Draxx into his vein.

Retrieved from "https://heykidscomics.fandom.com/wiki/Exterminators_Vol_1_1?oldid=1424495"
Community content is available under CC-BY-SA unless otherwise noted.