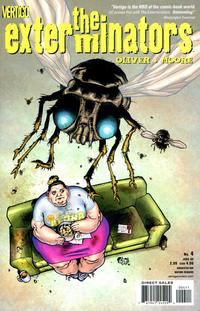 The afterlife must be seriously @#$%^$ up if that little $#!+ A.J. was on any resurrection shortlist.

Henry arrives for work at Bug-Bee-Gone and meets with Nils. Nils tells him about how fifteen cases of Draxx had been stolen from their plant. He has Saloth looking into the theft. On a more unpleasant note, Nils wants Henry to go to the morgue and identify A.J.'s body per Detective Hunter's request. Before doing so however, Henry asks Nils if he can partner with someone other than Stretch. Nils has Henry work with an exterminator named Kevin.

Kevin is a sloppy, strange man with a taste for easy listening music. Henry and he answer a call at a house occupied by two obscenely obese sisters. They complain of bugs beneath the couch, and Henry discovers that it's actually a rat. After setting a trap, the couch collapses beneath the one sister's weight. Henry refuses to remove the trap.

Afterward, Kevin and he have lunch. Kevin talks on about the Egyptian scarab beetle and how it is the symbol of life and rebirth. Following lunch, Henry goes to the morgue to meet Detective Hunter. Hunter suspects that Henry might be involved with the two Draxx-related deaths and he takes him to identify A.J.'s body. Henry confirms the man's identity and notices that A.J. had a scarab beetle tattooed across his back.

Meanwhile, Doctor Saloth Sar conducts an experiment using Draxx-infected roaches. He discovers that the specimens have grown more aggressive and have developed predatory instincts. He tests this by having the roaches attack a rat.

Later, Henry responds to yet another call to the Perez apartment. The tenants of the building accuse Henry of running a scam, stating that the infection is worse than ever. Henry opens up Mrs. Perez' apartment door and finds the room completely covered with bugs. Her son, Danielo, is floundering on the floor, desperately reaching for his inhaler, but cannot reach it because of the insects. Henry rushes in, scoops up Danielo and exits the apartment. The other tenants hold Henry accountable for the problem and refuse to let him leave until he takes care of it. Angry, Henry picks up a lead pipe and fights his way past the angry tenants.

Retrieved from "https://heykidscomics.fandom.com/wiki/Exterminators_Vol_1_4?oldid=1424498"
Community content is available under CC-BY-SA unless otherwise noted.