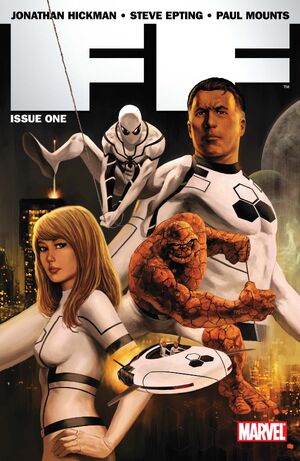 Spidey enters the Baxter building and is shown around the FF's headquarters and introduced to his new official FF costume. The FF then try to stop AIM from freeing the wizard but fail miserably in their first mission. Then at night the whole FF team enjoys their dinner but they still remember Johnny. Spider-Man is about to take a seat at the table, when Franklin tells him not to sit there (because that's where Johnny always sat). During the dinner Valerie informs her father Reed about her plan to make Doom join the FF. Reed is outraged and doesn't agree to the terms, until his father Nanthaniel tells him that its the right thing to do, and that it happened in the future. Reluctantly, Reed lets Dr. Doom join the FF.

Retrieved from "https://heykidscomics.fandom.com/wiki/FF_Vol_1_1?oldid=1750323"
Community content is available under CC-BY-SA unless otherwise noted.