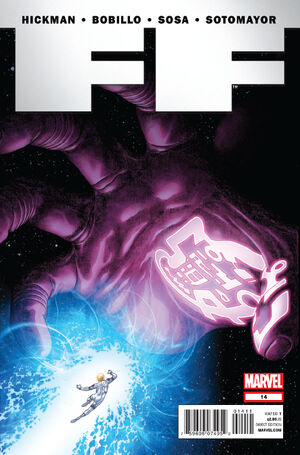 The Future Foundation is in dire straits. Trying to close The Bridge to stave off an invasion of mad cosmic entites, they are stymied by their technology. Worse, they dare not close it yet, since two of the number, Doctor Doom and "Reed-Alpha", are on the other side of the portal performing a rearguard action.

A set of severed Celestial appendages seem to be part of the array, holding it open. However, Franklin is able to use his reality-warping powers to see the truth: the fingers are seperate. Unfortunately, the discarded fingers reform as a giant hand, and possess Leech to form the "Hand of God", a servant whose job is to keep the gate open.

Some time ago, Valeria and Nathaniel Richards met in the former headquarters of the Brotherhood of the Shield to plan this day. Based on Nathaniel's knowledge of the future, they knew that on that day, three events will happen - must happen - at the same time. The problem was that if they happen all at once, then the Earth is doomed. They do the math - they need to buy 27 minutes, in which the Kree fleet can battle the Annihilation Wave, in which Galactus can show up, but before Galactus can leave Earth to the depredations of the Celestials. They need a piece of cosmic grit to gum up the mechanism. Doom. They just have to convince him to sacrfice himself.

Today, on the Bridge, Doctor Doom and "Reed-Alpha" are holding back the Celestials. Reed is using his Ultimate Nullifier. He thinks back to the founding of the Interdimensional Council of Reeds, when he and his counterparts argued whether the Nullifier would destroy its user, or whether a totally focused mind would be enough to control it and live. Unfortunately, remebering this day is enough to split his concentration, and he burns out. Leaving only Doom.

Sometime before today, Valeria told Doom what she had done to him. Surprisingly, he was very forgiving, and sure of his own power, he agreed to go through with it.

Today, he may regret this, as he faces the might of the Celestials.

The Celestials blast Doom, destroying him as an opponent. The Future Foundation try to close the gate now that they can, but the Celstials move fast, forcing their way through the gate and destroying the structure it is housed in.

Retrieved from "https://heykidscomics.fandom.com/wiki/FF_Vol_1_14?oldid=1640727"
Community content is available under CC-BY-SA unless otherwise noted.