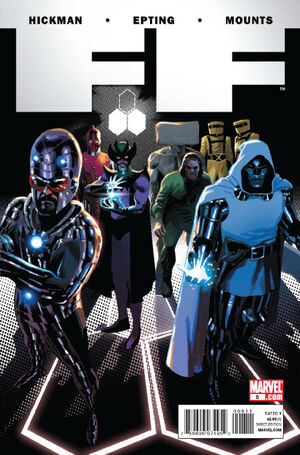 The city of Attilan is about to start an aerial assault on the Lost City of the High Evolutionary, with the aid of a Reed Richards. Meanwhile, the super-evolved inhabitants of the city prepare to defend themselves - also with the help of a Reed Richards.

In New York, the Future Foundation is preparing to depart for the battlefield. In this calm, Sue Richards corners Nathaniel and makes it clear that she does not like part in events to date. When Reed comes come in to break them up, Nathaniel gets him to admit that it was the actions of Reed and Valeria that brought them to this point. When Sue accuses him of acting like a soldier, he says that if the Council succeeds in their plan, the the planet will dissolve into chunks, and what follows it will be even worse. He departs, and Reed orders Sue to rest from her recent concussion while everyone else goes to save the day.

At the city, Doctor Doom preforms a magic to protect them from the effects in the city, and the group splits up to cover specific tasks. The High Evolutionary goes to shut down the engine at the heart of the lost city, while everyone else splits off into squads of two or three. Spider-Man worries that the villains need to be watched, but Reed brushes this off, pointing out the math is unassailable - one of the villains will betray them if given the chance, so considering the stakes, why worry?

Back in New York, Valeria tries to break out of her room, but her father's programming turns out to be superior to hers. Frustrated, she is surprised by an area of the wall being cut out by a blowtorch wielded by her big brother.

Back at the city, Reed, Nathaniel and Spider-Man have formed a secure zone using barricades made of webbing. Reed finally gets sight of one of the Reeds - his counterpart from Earth-4280, who lacks the creative spark of the other Reeds. Worrying about a stitch-up, he is suddenly interrupted by the arrival of Medusa and Lockjaw, who teleport down from Attilan to find Reed. Catching him, they teleport back up.

Retrieved from "https://heykidscomics.fandom.com/wiki/FF_Vol_1_8?oldid=1756361"
Community content is available under CC-BY-SA unless otherwise noted.