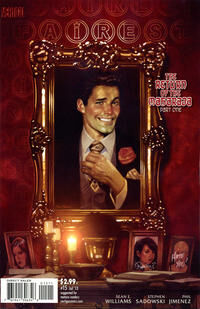 Appearing in "The Return of the Maharaja, Part One: Nalayani"Edit

Synopsis for "The Return of the Maharaja, Part One: Nalayani"Edit

Nalayani had lived in a small village, which struggled to survive without enough food to go around. There were no young men of her age in the village, thanks to the war against the British empire. Even so, she had refused the advances of undesirable men from outside the village for the sake of her pride. Meanwhile, the village had been attacked twice before by dhol, and now, a third time, leaving them without food and their homes on fire. In the wake of their destruction, the elders begged her to let them appeal to the new Maharaja. Nalayani did not believe the rumours that there was a new Maharaja, given the war, and pointed out that any man who had stayed behind must be a coward. Still, at her people's urging, she agrees to go and see the Maharaja Shah Ah-Ming

She travelled for three days through the jungle before reaching the next village, and soon realized that she had been followed by a jackal. In exchange for supplies, she treated the village's sick using her medical knowledge. Having hoped that the Jackal would be gone when she left the village, she is disappointed to find that it had waited for her outside. That night, she hears the jackal speak, warning her that the Maharaja is not the man that her people hope he is, and he would probably refuse her an audience, as he had refused it one. The jackal introduces itself as Tabaqui, who offers his protective services to her on her journey. All he asks in exchange is that she give him some extra scraps from the next village. As a show of friendship, he keeps watch over her for the night.

That night, Nalayani wakes to the sound of howling, and realizes that a pack of hyenas have attacked the jackal, and though she could kill them with her arrows, she would risk hitting him instead. Even so, the jackal seems to be doing well on his own, and tore out the attacking hyenas' throats. Nalayani rushed down to help him, offering medical attention.

Despite her initial distrust, Nalayani and Tabaqui become travelling companions, and eventually, friends. However, the jackal's injuries grow worse, despite her efforts to treat the wound. One night, their camp is approached by the same three men she had rebuffed days earlier, claiming that the jackal had stolen from them, and demanding justice. Nalayani rises to defend him, and though they doubt her conviction, she thrusts a knife through one man's hand. As the other two flee, she looses arrows that pierce their bodies fatally. Turning to the man she had knifed, she warns that she will let him live - but will kill him if he ever threatens anyone else again.

Afterwards, the two companions continue their journey, with Tabaqui seeming to get better with every day - which worries Nalayani. One night, he returns from food-gathering foaming at the mouth, and she realizes that he is no longer himself. Unfortunately, she is forced to kill him in self-defence and burn his body.

Finally, she arrives at the Maharaja's palace, and begs for the help she came to seek. After telling her story, the Maharaja's first response is to explain that Shah Ah-Ming is pronounced "Charming".

Retrieved from "https://heykidscomics.fandom.com/wiki/Fairest_Vol_1_15?oldid=1424837"
Community content is available under CC-BY-SA unless otherwise noted.