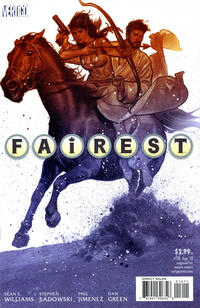 You should take your food back to your tent, Nathoo. I've worked up a different kind of hunger. Know what I'm in the mood for?

Appearing in "The Return of the Maharaja, Part Two: The Prince Who Would Be Maharaja"Edit

Synopsis for "The Return of the Maharaja, Part Two: The Prince Who Would Be Maharaja"Edit

After telling the story of her village's misfortune to the new Maharaja, Nalayani is frustrated by his nonchalant attitude. She presses him to act against the frequent attacks by the dhole, noting that other villages have been victim to these attacks as well. The Maharaja explains that they cannot do anything about it until morning anyway, and suggests they get to know each other in the meantime, for example: is she married? Rather than answer his question, Nalayani presses him to tell her about himself.

Charming explains that he has sat on several thrones throughout time, but had always enjoyed expeditions more. He returns her to his initial question, and she responds that she never married, because she decided to put the safety of her village above all else when all of the men fled. As such, the Maharaja suggests that they save her village as quickly as possible.

The next day, Charming remarks to a servant named Nathoo that he is in love, despite the fact that he already has a quite sizable harem. Innocently, Charming reminds Nathoo that he did offer to let him have one of those women, if he had only asked. However, he is not so much in love with Nalayani as he is with the challenge she presents.

Meanwhile, back at Nalyani's village, her people are becoming worried that she will not return before they starve to death - if the dhole don't kill them first. The village elder assures them all that they can survive on the fruits of the jungle, and that Nalyani's resourcefulness will mean that help will soon be on the way.

Despite Charming's offer to let Nalyani ride in a comfortable carriage with his other wives, she chooses to ride on a horse beside him, leaving Nathoo stuck with the mischievous and lascivious wives. Entirely uncomfortable with their open flirtation, he makes excuses, and chases after the Maharaja's elephant on foot.

Later, at camp, Nathoo visits Nalayani at her tent to invite her to dinner with the Maharaja. Rather than take him up on the offer, she sends her apologies, suggesting that they 'get to know each other' on the trail tomorrow. This does not perturb the Maharaja, who becomes so aroused that he decides to blow off some steam with one of his harem. Outside his tent, though, a man uses an item called the Trident of Sickness and Death to curse the Maharaja. Charming initially tries to ignore the beam of energy that envelopes the tent, but eventually becomes so distracted that he must investigate. He steps outside the tent just in time to be attacked by a pack of dhole. Nalayani rushes out with her bow to help fight them off, but when the dhole begin to run away, neither is sure of just what scared them off. Nalayani mounts her horse and urges Charming to hurry back to her village with her - these dhole were the same pack that has been attacking her village. Charming climbs up onto the animal behind her, and they give chase. Unfortunately, while pre-occupied with firing her arrows at the dhole, Nalayani loses track of the road ahead, and they go careening off the edge of a cliff, horse and all.

They survive the fall, but the horse is injured, and Charming is forced to use his last bullet on it, to put it out of its misery. He suggests they return to camp, rather than chase the dhole on foot, but the edge of the cliff is too sheer a drop. Nalayani explores the area around them, but unexpectedly collapses into a patch of quicksand.

Retrieved from "https://heykidscomics.fandom.com/wiki/Fairest_Vol_1_16?oldid=1424838"
Community content is available under CC-BY-SA unless otherwise noted.