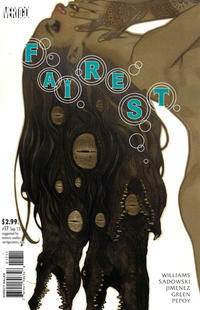 You're either really lonely, or you're the chattiest crocodile I've ever met.

Appearing in "The Return of the Maharaja, Part Three: The Village of the Dead"Edit

Synopsis for "The Return of the Maharaja, Part Three: The Village of the Dead"Edit

At the camp-site, Nathoo finds Buldeo preparing to put down an ox that was injured in the attack by the Dhole. Rather than showing any concern for the fact that Maharaja Charming has gone missing since the attack, Buldeo thinks on it as a vacation from the outsider-ruler's philandering. Though he finds Buldeo's reaction disrespectful, Nathoo is called away to look in on one of the Maharaja's wives, Shikha, who is ill. When he checks on her, he realizes that she is unwell in a way that he cannot even comprehend.

Meanwhile, Nalayani has fallen into a pit of quicksand, and may well be eaten by an approaching crocodile. Charming pulls out his scimitar to defend her, but the crocodile is fast, and makes the first move against him. The crocodile swears that once it has finished eating him, it will eat whatever of Nalayani remains above ground, just to spite him. With a lucky strike, Charming manages to hack off the crocodile's tail, and grumpily, it swims away, warning that it will be back for them when they are dead - because no one survives long in the Village of the Dead.

With the crocodile gone, Charming turns his attention to pulling Nalayani free of the quicksand, but her anxiety is making it difficult. He urges her to relax, but she requires something to distract her from what is happening. So, Charming tells her the story of how he became the Maharaja.

He had been trying to escape the Goblin imperium when he ignited a hot air balloon and accidentally blew himself up. Burnt and disfigured, the goblins found him, and set one of their slaves upon dragging him back to the cages. That slave happened to be Nathoo, who risked his life to save Charming from the goblins.

This much relaxes Nalayani enough for him to pull her free of the quicksand, and the two collapse on the solid ground nearby. Unfortunately, it begins to rain, and so they seek shelter in a nearby cave. To pass the time, Charming tells more of his tale.

He came to in a village where Nathoo's mother took him in. When he got better, he realized that the village was full of the most beautiful women he had ever seen, and that there was little competition or their affections. Unfortunately, his burns were so bad that they repulsed those women. Fortunately, his popularity as a Fable allowed him to heal quickly.

After he recovered, he learned the villagers' language, and intended to ingratiate himself with the women. He met resistance in Buldeo, who was the village's hunter. Fortunately, Buldeo was prone to talking instead of fighting, and Charming gained the advantage over him. Despite Buldeo's decision to stay in the village, he and Nathoo never got along - due to some untold past controversy.

The turning point for Charming's status in the village had come when he had used his gun while hunting. The locals had never seen one before. Thanks to this weapon, he was able to unite a few villages into one, and using what armour and weapons he could find, he trained the able-bodied women of the village into an army to fight any village or goblin who opposed. Eventually, he brought that army to the palace of the Maharaja and demanded that he give up his throne. Not willing to fight against the man with the gun, the Maharaja passed his duties on to Charming. Unfortunately, Charming's tale is interrupted by a coughing fit, and Nalayani realizes that some kind of infection is festering on his hand.

Meanwhile, Shikha dies a gruesome death of that same infection.

Retrieved from "https://heykidscomics.fandom.com/wiki/Fairest_Vol_1_17?oldid=1553321"
Community content is available under CC-BY-SA unless otherwise noted.