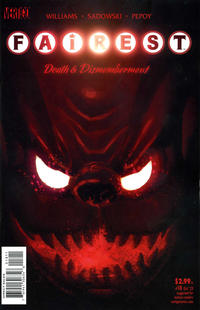 I've devoted my life ot taking care of the people of my village. I've resigned myself to that. I don't know that I can love anyone as much as I love them.

Appearing in "The Return of Maharaja, Part Four: Death and Dismemberment"Edit

Synopsis for "The Return of Maharaja, Part Four: Death and Dismemberment"Edit

With Charming affected by boils on his hand, Nalayani decides it would be best to search the holes surrounding the Village of the Dead for any kind of food or medical supplies, as old as they might be. As the prince is obviously sick and he won't eat the horse she cooked, Nalayani is concerned for his health, and ignores his warnings against checking the holes. Though he initial searches are fruitless, she eventually discovers something.

Back at camp, Nathoo is annoyed to learn that while he was out looking for the Maharaja, Buldeo was drinking his master's wine and sampling his women. Angrily, Nathoo warns that his rival's behaviour will not stand, recalling how Buldeo had failed to be of help when the Asuras attacked them, or when the Pishacha possessed a child and ate all the people in her village, Buldeo had advised them to ignore it. It is clear to Nathoo that Buldeo no longer desrves any respect. This outburst angers the larger man, and he rushes at Nathoo, warning that he is not in charge. He is surprised then, when he is surrounded by the Maharaja's soldiers, who are loyal to Nathoo. Angrily, Nathoo exiles Buldeo from camp.

Nalayani returns from one of the caves with some grain and a book that she can't seem to read. Charming realizes that the book is actually written in English; it is the journal of someone named B.K. Unfortunately, the book holds no clue as to how to get out of the pit. Sighing, the prince asks Nalayani to help him up but they are both horrified when his fingers break off in her grasp.

Meanwhile, Buldeo drunkenly grumbles to himself, wandering into the woods. When he realizes that he is surrounded by the dhole, he can only laugh. The Maharaja had gone out to look for them, and yet, here they are. Before long, they have killed him.

Though his injury doesn't hurt, Nalayani decides to take the prince's mind off of what just happened by telling him a story. Long ago, an old hermit had lived in her village. She had liked him, and they established a familial relationship. When the Adversary came, he had gone off to fight in the war and had never returned. Before he left, he gave her a necklace. Though the necklace has no value, it means very much to her, and she thinks, perhaps, the old hermit might have been her one true love. The prince admits that he never really understood love, waving away the food she offers him. Unfortunately, another finger breaks off into her bowl. Horrified, he begins stumbling into one of the caves, depressed that he has become repulsive. Smiling, Nalayni responds that a finger in her food is not the worst she's ever seen, and plucks it out, returning to her meal. Realizing how little she cares about his appearance, the prince blurts out with some surprise that he might be in love with her. Strangely, his hand begins to reform into its proper shape with that admission.

The prince realizes that it was love that saved his hand. Before now, he had never felt this way before. In all three of his marriages, he had thought he loved each of his wives, but he was wrong. Uncomfortably, Nalayani must admit that she does not love him - at least, not yet. She has devoted her life to her village, and resigned herself to only that. The prince understands that devotion, and decides that they have no choice by to find a way out and save her village.

Nalayani has a plan for that, and the next morning, they attempt to kill the crocodile by tempting it with the prince's rotten fingers. Unfortunately, Mugger is not the least bit tempted by them, though a hungry crow that is willing to stoop for the fingers is quite tempting. As the Crocodile snaps at it, the prince leaps onto its back. As it reels back, Nalayani pierces its throat with an arrow, and the prince thrusts his scimitar between its eyes. With the crocodile dead, the pair can continue their journey to find and kill the dhole.

Retrieved from "https://heykidscomics.fandom.com/wiki/Fairest_Vol_1_18?oldid=1424840"
Community content is available under CC-BY-SA unless otherwise noted.