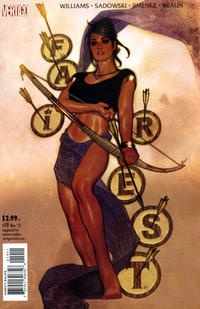 When they needed me most, I wasn't here. And Now they're all dead because of it.

Appearing in "The Return of the Maharaja, Part Five: The Dhole of War"Edit

Synopsis for "The Return of the Maharaja, Part Five: The Dhole of War"Edit

At last, Prince Charming and Nalayani return to their camp, to the great surprise and pleasure of Nathoo, who has been searching for them for days. Unfortunately, the reunion is tinged with sadness, as in the Maharaja's absence, Shikha was killed by the same curse that Charming had survived. Meanwhile, Buldeo had also been torn to pieces by the dhole after leaving the camp in anger. Nathoo feels responsible, since he drove Buldeo away, but Charming absolves him of guilt. Hearing talk of the dhole, Nalayani interrupts, learning that the creatures are on their way back towards their camp - and this time, they intend to be ready to stop them.

That night, Nalayani and Charming hold camp at a nearby village, prepared with warriors to face the dhole. Unexpectedly, though, Charming is taken aback by the sound of the creatures crying out in pain in English. Thanks to some strategy, Nalayani and the villagers surround the dhole, which prompts them to transform into their true forms: Makara. As he is yanked up into the air by his leg, Charming calls out for the creatures to stop, and they are just as surprised as he was that he speaks English. The creatures explain that they are related to Bigby, and call a stop to their attack when it becomes clear that Charming knows the wolf.

That night, around the fire, the creatures explain how they were tasked with killing goblins by Bagheera, but once they were done, Prince Ambrose took Bagheera away, and they were forced to wander. The wolves of the Seeonee refused to accept them into their pack, so they decided to take the form of dhole instead, thinking the fact that the locals feared the creatures would help them lay low as Fables. Eventually, they found a new master to replace Bagheera, who gave them purpose in attacking villages.

Now, though, they are under the command of the Prince, and he wants to know who their former leader is. Unfortunately, they don't know, but they insist that once he knows Charming is alive, he will find them. Learning that the Makara are now under the prince's command, Nalayani decides to return to her village, but the Makara explain to the prince in the English that Nalayani cannot understand, that her village was destroyed as revenge for her having killed one of their number. When she learns the truth, Nalayani becomes enraged at both the Makara and the prince who tries to protect them, and storms off.

The prince finds her in a clearing, crying that when she was a girl, she would come to that clearing to be alone. She had a dream there once that the gods were her friends, and taught her all the skills of a warrior. When the men left to fight the goblins, she was all that remained to lead her people, and protect them. At times, she had wanted to leave her people, but she couldn't. She couldn't let them down - but now she had, without trying. When they needed her most, she was gone, and now they're all dead.

Charming helps her to her feet, and she curses herself for not killing the Makara when she had the chance - she had just felt that killing was senseless. Now, without her village, she can't imagine what to do. Charming offers her a place in his palace, if only temporarily, and reluctantly, she agrees.

After days of travelling back to the palace, they find that the throne has been usurped by the original Maharaja - Sindhu Baba Singh. It was he who ordered the dhole attacks.

Retrieved from "https://heykidscomics.fandom.com/wiki/Fairest_Vol_1_19?oldid=1424841"
Community content is available under CC-BY-SA unless otherwise noted.