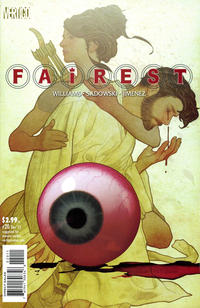 What charm? All I see is a feringhi who keeps getting himself cursed and injured.

Appearing in "The Return of the Maharaja, Part Six: Charming to the Last"Edit

Synopsis for "The Return of the Maharaja, Part Six: Charming to the Last"Edit

After the discovery that it was the original Maharaja who had been ordering the Dhole to attack villages such as Nalayani's, she and Prince Charming are now threatened by Greyheart, the malevolent leader of the Makara. While the other Makara have since repented their actions, Greyheart suffers no guilt, and would fight his own kind to destroy the Fables. In the meantime, though, Sindhu Baba Singh attacks Charming with an enchanted trident, wondering why the prince chose to depose him.

Singh had once had a fine life as the Maharaja with wealth and women, but that all changed when the demon armies burned his empire. His family was taken from him, and all he could do was flee. He hid in a cave, praying for aid from the gods, and those prayers were answered by Nandini. She gave him food and in answer to his begging to have his throne back, she gave him the Trishula, with which he caused plague and disease among the goblin hordes. Slowly, he began to carve out a place for his old life to continue, until Charming arrived and took everything away from him. Using his weapon, he drew the attention of the Dhole, who agreed to help him get back what was his.

The Prince is unsympathetic to the tale, slicing off Singh's arm, and offering the choice to die or to let Charming have his doctor heal him. Defiantly, Singh thrusts the trident upward, piercing through the prince's eye. Before he can do further damage, Nalayani looses an arrow into his brain. She and Nathoo are naturally concerned about the prince, but Charming insists that he will eventually be able to grow the eye back. Having defeated Singh, Greyheart is now under the control of Prince Charming, and he has it and the Dhole clean up the throne room before being shown to their quarters.

Later, the prince is visited in his bed by Nalayani, who kisses him on the forehead, to his chagrin. He asks what will become of them, given his feelings for her. She responds resignedly that while her feelings haven't changed, the extent of her interest is her fondness for him. She needs now to grieve, and worries that a relationship with him would make her grow to resent him for his role in the loss of her family. So, they will have to be friends. The prince muses that he has never had a woman only want to be friends with him before. Until recently, he was a different man; a womanizer. Nalayani changed him. Her selflessness and immunity to his charm made him love her. Smirking, she responds that a man who gets himself injured and cursed so often isn't that charming.

Nathoo visits the prince next, reporting that the Makara had chosen to remain in their dhole form, which made the other animals in the stables uncomfortable. Rather than stay in the palace, they chose to live in the jungle surrounding the palace, and were grateful to be given the routine of patrolling the palace grounds on a regular basis. The prince notes that he is aware of how concerned Nathoo was when he saw him get injured, and presses him to admit that he is in love with him. Embarrassed, Nathoo admits that he is in love with Charming, and the prince assures him that it is nothing to be ashamed of. After all, the prince is forever in Nathoo's debt for saving his life. Their conversation is interrupted suddenly by a messenger who warns of something they need to see.

Outside, the palace has been surrounded by emissaries from Sinbad. Over dinner, Sinbad wonders whether Charming will be returning with him to Fabletown. The prince admits that he isn't sure. Worriedly, Nathoo speaks up, wondering who will lead the Indu if Charming goes home. Grinning, Charming suggests that Nathoo himself give it a try. Initially, Nathoo is incredulous, but the prince rises and removes his turban, placing it on the young man's head. From this point on, Nathoo would be the Maharaja.

Despite her loyalty to her now gone village, Nalayani is drawn to the idea of seeing a new world, and agrees to go back to Fabletown with the prince. This certainly pleases the prince, as he is determined to hear her say that she loves him back.

Retrieved from "https://heykidscomics.fandom.com/wiki/Fairest_Vol_1_20?oldid=1424842"
Community content is available under CC-BY-SA unless otherwise noted.