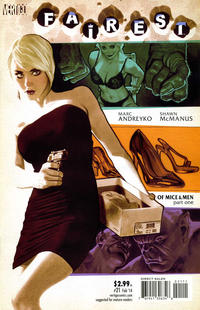 Appearing in "Of Men and Mice, Part One: It Happened One Night"Edit

Synopsis for "Of Men and Mice, Part One: It Happened One Night"Edit

Years ago, the Fairy Godmother granted Cinderella's wish to go to the ball, creating a lovely dress for her, a coach from a pumpkin, horses from pigs, and coachmen from mice.

Now, Snow White puts her step-children to bed, only to be attacked suddenly by ninja rats. Fortunately, she is not entirely defenceless, and manages to grab one of their swords away from them and cut them to pieces. She leaves one alive long enough to demand who sent them, but before it can tell her, its body disintegrates.

Later, Crispin receives a visit at the Glass Slipper from Sheriff Beast, who asks after his employer. Crispin expresses his annoyance with the fact that she treats the shop like an ATM, making him do all the work while she collects the spoils. Before he can say anymore, someone else enters the shoe shop and reveals explosives strapped to their chest, shouting "Death to Cinderella!" Beast knocks Crispin to the floor as the bomber detonates.

Within three days, Cinderella has been captured by trolls in Thailand. They have graduated from guarding bridges to trafficking in Mundies, and they have failed to notice that she is not a Mundy. Fortunately, Snow White had the foresight to send the mouse Dickory to help her, and he gets to work on gnawing through her bonds. Angry that the trolls dared to kidnap her, and downright outraged at their selling women into sexual slavery, Cinderella kills all of the trolls, and frees their prisoners.

After getting some clothes for herself, Cinderella makes her way back to Fabletown, checking in on Crispin, who was left comatose after the explosion. Feeling guilty that the bomb that was meant for her hurt someone she cares about, she asks Beast to take her to Snow White.

At the morgue, Snow White has Cinderella take a look at one of the dead ninja-rats' bodies. Snow White wonders who might want both her and Cinderella dead. The Coroner explains that the creature is neither Mundy nor Fable, which is curious. This sparks a memory in Cinderella, who supposes that she knows who is responsible, and that person resides in Ultima Thule.

Retrieved from "https://heykidscomics.fandom.com/wiki/Fairest_Vol_1_21?oldid=1424843"
Community content is available under CC-BY-SA unless otherwise noted.