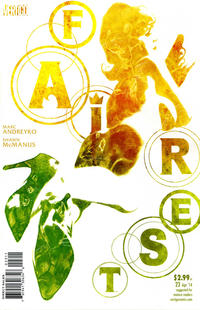 Appearing in "Of Men and Mice, Part Three: Blue By You"Edit

Synopsis for "Of Men and Mice, Part Three: Blue By You"Edit

Long ago, the mouse Marcel snuck his way into the royal ball, passing himself off as a human and soon being swept up by a lusty lady who bedded him promptly. Though she commended him on his good work, she was surprised to learn that he was a virgin. As she got dressed, she mused that she never would have slept with him if she'd known - virgins get so attached. Their tryst had been nothing but a bit of fun to her. As she left, Dickory felt himself transforming back into a mouse, and begged her to come back. As tears welled in his eyes, he confessed that he loved her. Unexpectedly, this caused the transformation to reverse, and he was human again.

Six hours ago, Cinderella had to undergo the experience of holding her dying Fairy Godmother in her arms, wounded by a gang of ninja rats. Though the assassins were long gone, Dickory sent for the King's Men and, while rooting through the Fairy Godmother's purse, he discovered a plane ticket to India. Unfortunately, the plane would be leaving in just ninety minutes, and Cinderella had to go, leaving Dickory to handle things there, using magic to keep the Godmother alive until the authorities arrived.

Now, after a long and unpleasant flight, Cinderella spots the man who was meant to be waiting for her Fairy Godmother, and is annoyed when he makes a run for it. Her long and obstacle-filled chase is suddenly thwarted as a man tackles her, plunging her into a nearby fountain. Soaked and enraged, she turns to shout at the man, only to discover that it is Ramayan, who comments that it's been a long time since they saw each other.

Following some great hello-sex, Cinderella grips him by his chest-hairs and demands to know why he stopped her. He explains that since they last met, he gave up his position as a mega-fable - a hero to the people - to become a night watchman at a local temple. One night, a skinny man had come to him claiming he was being stalked, and asked Ramayan to follow him to the airport in case things went badly. Curious, Cinderella presses him to take her to work with him.

Going out in public requires that Ramayan put on full-body makeup to cover his blue skin. On the way, he explains that he believes the man she seeks will be at the temple, because he lives there, after all, taking care of the rats. Cinderella follows him, but suspects something bad is going to happen. She can feel something familiar in the air, but can't place it. Even so, she moves on.

That feeling was well-founded, because her stepsister is spying on her from a nearby cafe, hoping Cinderella will lead her to her next assassination target.

Meanwhile, back in Fabletown, the Three Blind Mice perform an autopsy on one of the rat ninjas' corpses, but they find nothing. One of them, who had just been exploring the rat's innards, decides to wash off, and while separated from the other two, he is grabbed by another rat. However, he appears to return to his companions as if nothing had happened.

Cinderella is surprised to learn that the man who had run from her before is in fact Marcel, whom she remembers from her night out so long ago. She warns that he must go back to Fabletown, as he may be the solution to a significant problem. He agrees gladly, explaining that he has changed his lecherous ways and now helps people. As they make their way out though, gunfire causes chaos, and Ramayan is shot. Worriedly, Cinderella looks up to see her stepsister bearing down on her. Though she holds a gun, she intends to make Cinderella's death slow.

Retrieved from "https://heykidscomics.fandom.com/wiki/Fairest_Vol_1_23?oldid=1424845"
Community content is available under CC-BY-SA unless otherwise noted.