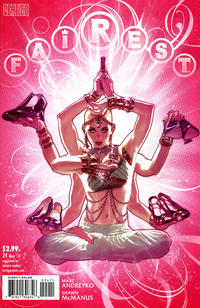 You fathered, I dunno, hundreds, maybe thousands of mice, mice/men, and a few regular kids over the past couple of centuries and abandoned them all? How is that giving them their "best lives"?

Marcel, the mouse-turned-man and lecher had discovered that being in love with women he slept with maintained his human form, and as such, he slept with and loved a great many women. Over the many years, though, he also fathered several children who came in several forms, be they human, mouse, or rat. He tried to give them all the best lives they were able to have, but in the end, he abandoned them all. By some miracle of magic, the power that maintained his humanity for centuries erased the memory of him and the children from the mothers. Now, he is unhappy to learn that some of his children have been trained to assassinate Fables, and that those assassins may have killed the Fairy Godmother as well.

36 hours earlier, Cinderella had been forced to fight her stepsister on the floor of the rat temple that Marcel worked at, all while struggling to keep both Marcel and Ramayan - who had already been injured - alive. However, Marcel was not defenceless. Angrily he warned the stepsister not to defile the temple any further, warning that she would fall victim to his army of rats, should she fail to leave. The rats leapt at her, giving the trio enough time to escape before she recovered.

Meanwhile, back in Fabletown the Dickory had managed to get the Fairy Godmother medical attention, despite her having taken a bullet to the head. With frustration one of the Three Blind Mice waited for Dickory to leave him alone with her, but he was called away by his companions before that happened. Alone with her instead, Dickory turned on a TV in hopes of stimulating the Godmother into a waking state, and helping her brain injury heal.

Cinderella was displeased to learn that the next leg of her journey would be travelled by boat, but even so, she thanked Ramayan for his help, and boarded with Marcel.

Unexpectedly, the Fairy Godmother recovered almost completely, prompting Snow White to pay her a visit, wondering how. The doctor explained that a commercial had come on air for the Rodgers and Hammerstein musical "Cinderella", providing enough believers among Mundies to give her a recovery. Given the importance of the Fairy Godmother to resolving the current situation, Snow White leaves Sheriff Beast to watch over her, causing the rogue Blind Mouse great frustration.

Now, Cinderella leaves Marcel alone on the boat for only a moment, and that is all it takes for her stepsister to sneak up on him. When Cinderella returns, she finds her with her hands wrapped around Marcel's neck, and angrily tackles them both, causing all three of them to flop over the side of the boat, and crash into the water.

Retrieved from "https://heykidscomics.fandom.com/wiki/Fairest_Vol_1_24?oldid=1424846"
Community content is available under CC-BY-SA unless otherwise noted.